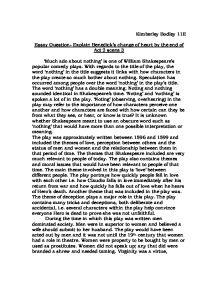 Explain Benedick's change of heart by the end of Act 2 scene 3 'Much ado about nothing' is one of William Shakespeare's popular comedy plays. With regards to

Kimberley Bodley 11E Essay Question- Explain Benedick's change of heart by the end of Act 2 scene 3 'Much ado about nothing' is one of William Shakespeare's popular comedy plays. With regards to the title of the play, the word 'nothing' in the title suggests it links with how characters in the play create so much bother about nothing. Speculation has occurred among people over the word 'nothing' in the play's title. The word 'nothing' has a double meaning. Noting and nothing sounded identical in Shakespeare's time. 'Noting' and 'nothing' is spoken a lot of in the play. 'Noting' (observing, overhearing) in the play may refer to the importance of how characters perceive one another and how characters are faced with how certain can they be from what they see, or hear, or know is true? It is unknown whether Shakespeare meant to use an obscure word such as 'nothing' that would have more than one possible interpretation or meaning. The play was approximately written between 1596 and 1599 and included the themes of love, perception between others and the status of men and women and the relationship between them in that period of time. The themes that Shakespeare included are very much relevant to people of today. The play also contains themes and moral issues that would have been relevant to people of that time. The main theme involved in this play is 'love' between different people. The play portrays how quickly people fell in love with each other i.e. how Claudio falls in love immediately after his return from war and how quickly he falls out of love when he hears of Hero's death. Another theme that was included in the play was. The theme of deception plays a major role in this play. The play contains many tricks and deceptions, both deliberate and accidental, i.e. several characters within the play help convince everyone Hero is dead to prove she was not unfaithful. ...read more.

She wants to be independent rather than be the house wife he wants her to be. 'I thank God and my cold blood; I am of your humour for that.'- This is the first agreement between Beatrice and Benedick. This may seem odd as both have been bickering. Beatrice agrees with Benedick's views of love when he says 'I am loved of all ladies, only you excepted'. From here the audience and the characters them selves can see they do have things in common and know they have met previously. The main quote that best summarise her views on love is the quote 'I had rather hear my dog bark at a crow than a man swear he loves me' meaning that if a man was to tell her he loves her she would not be impressed. The relationship between Benedick and Beatrice is quite negative to begin with. Beatrice becomes quite witty with the messenger. She calls Benedick 'Signor Mountanto' (upward sword-thrust in fencing) but all for the wrong reasons. She carries on mocking Benedick by saying 'And a good soldier to a lady', here Beatrice implies that he is a lady's man. When Benedick arrives, Beatrice is quick in throwing a remark towards Benedick. 'Signor Benedick, nobody marks you'- Beatrice questions why Benedick is talking as no one is listening to him. Benedick's response to this is 'Are you yet living?' which basically means 'are you still here?' Their passing of witty remarks continue on through the act. Leonato states of a merry war between Beatrice and Benedick to the messenger, meaning a war of words between the both of them. Although he implies a war, the audience can see that their banter between each other does not ring true, in other words what they say, they don't mean. As the audience we can see a love/hate relationship developing and there is dramatic irony as it is obvious to the audience that they fancy each other. ...read more.

At the end of the play both couples are reunited after Hero's innocence is proven. 'I do love nothing in the world so well as you'- Benedick admits how much Beatrice means to him. In conclusion it has been shown that Benedick's views on love and marriage have changed drastically from the beginning to the end of the play. Benedick, a man who professed he would die a bachelor is now a Benedick 'horribly in love' at the end of act 2 scene 3. At the end of the play Benedick is still shown as the well respected man that he was at the beginning of the play but he has gained the respect from Beatrice that has changed his views entirely. 'I would not deny you, but by this good day, I yield upon great persuasion, and partly to save your life, for I was told, you were in a consumption.'- Benedick and Beatrice agree to accept each other. Don Pedro asks how Benedick, 'the married man' is, in response Benedick says 'a college of witcrackers cannot flout me out of my humour', Benedick is so happy that a college of jokers could not mock him and make him unhappy. This is a very different Benedick from the start of the play who said he would be transformed in to 'an oyster' if he was to fall in love. 'Let's have dance ere we are married, that we may lighten our own hearts'- Benedick is shown full of excitement now that he is married at the end of the play. This quote in comparison to what Benedick would have said earlier on the play about getting married shows how Benedick has been transformed in to a man that does not fear love and marriage. The kiss between Benedick and Beatrice at the end of the play symbolises that the couple are officially together and have found love. ...read more.