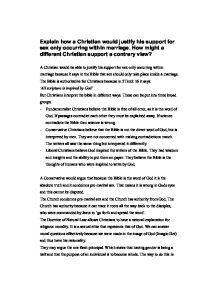 Explain how a Christian would justify his support for sex only occurring within marriage. How might a different Christian support a contrary view? A Christian would be able to justify his support for sex only occurring within marriage because it says in the Bible that sex should only take place inside a marriage. The Bible is authoritative for Christians because in 2Tim3: 16 it says: 'All scripture is inspired by God' But Christians interpret the bible in different ways. These can be put into three broad groups. - Fundamentalist Christians believe the Bible is free of all error, as it is the word of God. If passages contradict each other they must be explained away. If science contradicts the Bible then science is wrong. - Conservative Christians believe that the Bible is not the direct word of God, but is interpreted by men. They are not concerned with making contradictions match. The writers all saw the same thing but interpreted it differently. - Liberal Christians believe God inspired the writers of the Bible. They had wisdom and insights and the ability to put them on paper. They believe the Bible is the thoughts of humans who were inspired to write by God. ...read more.

This is clearly ridiculous. They might argue that in a modern world the risk of STDs and unwanted pregnancies can be significantly reduced by the use of contraceptives .So we can have sex outside of marriage and still be loving to ourselves, our partners and future children by using contraceptives. They might argue that we do not need to be married to demonstrate all the four types of love. That love does exist outside of marriage and that sex which is an act of love should be allowed outside of marriage. The Liberal position is that as long as love and consent exists between the partners then it is permissible to have sex before marriage. Ultimately the decision as to whether sex outside marriage is morally acceptable is very individual and must be based on their love of God and of their partner. Section Three "The view of 'no sex before' is hopelessly old-fashioned and of no relevance to people today." To what extent do you agree with this statement? Explain your answer fully. Some people would completely agree with the statement and argue that sex is a pleasurable experience and that if it feels good go for it. ...read more.

I also believe that casual sex is wrong because after it the 'couple' have nothing to give to each other and love, fondness and common ground do not exist. It depersonalises the sexual act and if it is only an act and not an expression of love there can be little self-respect. This only results in the two people feeling used and they become emotionally scarred by the experience. Casual sex results in paranoia as to how much people are living up to their partners previous sexual experiences and how much they are satisfying them both sexually and mentally. I also believe that the term love has been abused by modern society, we love films and foods, we can easily fool ourselves that we are in love when we are not. Love is connected with sex and is therefore easily confused with lust. We need a way to express ourselves when we are really in love and I believe sex should be saved for this purpose. In conclusion I believe that sex before marriage is acceptable, but only in a stable, commited, loving relationship. I also believe that to dismiss saving sex for marriage as being irrelevant simply because it is old or a religious viewpoint is wrong. Everyone needs to form their own ethical values on this issue by analyzing the facts and applying logic and reasoning. ...read more.