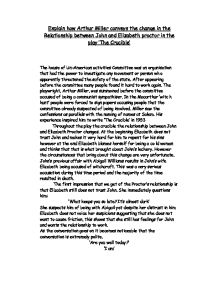 Explain how Arthur Miller conveys the change in the Relationship between John and Elizabeth proctor in the play 'The Crucible'.

Explain how Arthur Miller conveys the change in the Relationship between John and Elizabeth proctor in the play 'The Crucible' The house of Un-American activities Committee was an organisation that had the power to investigate any movement or person who apparently threatened the safety of the state. After appearing before the committee many people found it hard to work again. The playwright, Arthur Miller, was summoned before the committee accused of being a communist sympathiser. In the Macarthur 'witch hunt' people were forced to sign papers accusing people that the committee already suspected of being involved. Miller saw the confessions as parallels with the naming of names at Salem. His experience inspired him to write 'The Crucible' in 1953 Throughout the play the crucible the relationship between John and Elizabeth Proctor changes. At the beginning Elizabeth does not trust John and makes it very hard for him to repent for his sins however at the end Elizabeth blames herself for being a cold woman and thinks that that is what brought about John's lechery. However the circumstances that bring about this change are very unfortunate. John's previous affair with Abigail Williams results in John's wife Elizabeth being accused of witchcraft. This was a very serious accusation during this time period and the majority of the time resulted in death. The first impression that we get of the Proctor's relationship is that Elizabeth still does not trust John. ...read more.

He speaks for her reflecting the time the play was set in, in the sense that men were seen as superior to women and spoke for them. It may also imply that John does not trust Elizabeth to keep his lechery a secret or perhaps he is just trying to protect her. 'She believe in the Gospel every word' The fact that John is quick to jump to Elizabeth's defence shows that he does not want her to be thought badly of and still sees her as innocent even though she is making it hard for him to redeem himself, he probably feels guilty for what he has done and perhaps blames himself for the accusations against Elizabeth due to the fact that it is Abigail making the accusations, probably a direct result of his lechery. When it comes to Elizabeth being taken away she is determined not to show John that she is afraid. '(With great fear) I will fear nothing' This implies that she wants to appear as a strong woman to John, she fears that he compares her to Abigail and yet it is also possible. And very likely, that she compares herself to Abigail and therefore is constantly on the defensive, when in reality she doesn't need to be. In this scene the stage reflects the time it was set in, as the living room is low and rather long, yet this also has an impact on the audience as it makes the atmosphere oppressive and fits the scene extremely well. ...read more.

'I never knew how I should say my love' John's crisis of conscience is very like Arthur miller's experience of McCarthyism. John feels forced to confess to something that he did not do as did Miller the difference between the two being that Miller did not confess where as John did although he could not follow his confession through. By the end the Proctor's relationship is the opposite of what it was in the beginning. 'John kisses her passionately' They seem to have finally been able to put the affair behind them. They are at ease with one another and although it does not actually say she kisses him back it is very different from the kiss in act 2: 'Kisses her, she receives it' The significance in the title is that a crucible is a container made of a substance that can resist great heat however a crucible is also defined as a severe test. Within the context of the play the term takes on a new meaning not only is the crucible a test, but a test that brings about a change or reveals an individual's true character. The witch trials serve as a metaphorical crucible, the characters facades are burned away and their true intentions are revealed. In other words, the audience observes the character as he or she is tested, and the audience ultimately determines if he or she passes the test. It links in particularly with John Proctor as he passed his test and he came out of the ordeal pure, as do metals etc which are burned in a crucible. ...read more.