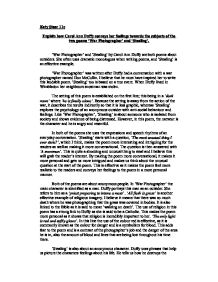 Explain how Carol Ann Duffy conveys her feelings towards the subjects of the two poems 'War Photographer' and 'Stealing'.

Katy Steer 11c Explain how Carol Ann Duffy conveys her feelings towards the subjects of the two poems 'War Photographer' and 'Stealing'. 'War Photographer' and 'Stealing' by Carol Ann Duffy are both poems about outsiders. She often uses dramatic monologues when writing poems, and 'Stealing' is an effective example. 'War Photographer' was written after Duffy had a conversation with a war photographer named Don McCullin. I believe that he must have inspired her to write this laudable poem. 'Stealing' too is based on a true event. When Duffy lived in Wimbledon her neighbours snowman was stolen. The setting of this poem is established on the first line; this being in a 'dark room' where 'he is finally alone'. Because the setting is away from the action of the war, it describes the results indirectly so that it is less graphic, whereas 'Stealing' explores the psychology of an anonymous outsider with anti-social behaviour and feelings. Like 'War Photographer', 'Stealing' is about someone who is isolated from society and shows evidence of being distressed. However, in this poem, the narrator is the character and he is angry and resentful. ...read more.

I believe that she did this to portray a more vivid image of the characters and their surroundings. I believe that Duffy wanted the readers to understand the situations the characters were in to create a more effective image of how they were at the time and how their surroundings influenced their job, such as when the thief needed a quiet and secluded area so that he could steal the items. In 'Stealing' Duffy explains that when the snowman was stolen it was 'Midnight'. This being when there is little noise and no people around. I believe that 'Midnight' means dark and silent and when evil things take place, which in his case is true. The darkness is also a contrast with the snow and makes the reader get a feeling of coldness and eeriness. I believe that 'War Photographer' shows Duffy's feelings in a more compassionate way, this making them more obvious to the reader. This is because I believe she pleads to the reader in some lines of the poem, 'Home again // to ordinary pain which simple weather can dispel, to fields which don't explode beneath the feet // of running children in a nightmare heat' and 'A hundred agonies in black-and-white // from which is editor will pick out five or six // for Sunday's supplement'. ...read more.

It starts with him arriving home from one job and ends with him leaving for the next one, as if his life runs in a cycle. Although 'Stealing' is written in five different stanzas, there is no regularity in the lines. 'I joy-ride cars // to nowhere' and 'My breath ripped out // in rags' are examples of enjambment which help us 'act out' what is being described to us. I believe that Duffy conveys a considerable amount of variety of her feelings to us through both of the poems. In 'Stealing' she is examining someone else's attitude to life; 'Better off dead than giving in. I was...sick of the world.' This is what I believe she wanted to convey to us the most as she thinks that it is the most important. I believe she is also trying to understand why anyone would want to commit a senseless crime. We see the character's pessimistic attitude; although he would like his life to be glamorous, he is reduced to getting satisfaction from stealing a snowman and 'things I don't need'. In 'War Photographer' I believe Duffy intended to convey to us that a war photographer does an important and heroic job, yet he is not appreciated and that a war photographer earns his living through recording the pain of other people. ...read more.