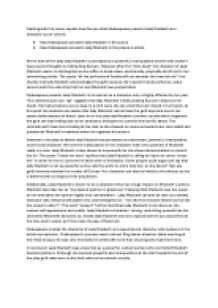 Explain how far you think Shakespeare presents Lady Macbeth as a character out of control.

This contrasts with how she is feeling at the start as she showed no remorse towards dun cans death and questioned Macbeth?s manhood when he regretted his actions. However in the play as whole lady Macbeth was presented as a dominant, powerful, manipulative, cruel brutal character. We see the manipulation in her character when she questions if Macbeth really is a man. Lady Macbeth is also shown to be powerful as she shows determination to commit the sin. The quote ?Unsex me here? typifies that Lady Macbeth is calling evil spirts to come ?unsex her? in order for her to commit the deed with no hesitation. Some people could argue and say that lady Macbeth is not as powerful as she calls the spirts to come help her, so she doesn?t feel any guilt/remorse towards the murder of Duncan. ...read more.

The word ?serpent? further describes Lady Macbeth?s evil nature as she messes with appearance and reality. Lady Macbeths character I strong, controlling, powerful as she controlled Macbeths decisions.so, clearly lady Macbeth was not a typical women you would find at the time and it seems as if she broke the law of feminism. Shakespeare created the character of Lady Macbeth as a supernatural character who believes in the witches prophecies. Shakespeare?s purpose was to attract King James attention (who was king at the time) because he was very interested in witchcraft more than any king who had the throne. In conclusion Lady Macbeth was presented as a powerful, wicked women who controlled Macbeth decisions/actions. Although she seemed powerful and manipulative at the start towards the end of the play guilt takes over to the limit where she commits suicide. ...read more.