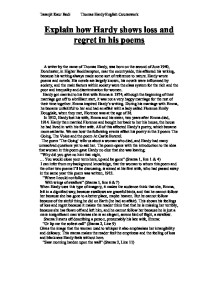 Explain how Hardy shows loss and regret in his poems

Explain how Hardy shows loss and regret in his poems A writer by the name of Thomas Hardy, was born on the second of June 1940, Dorchester, in Higher Bockhampton, near the countryside, this affected his writing, because his writing always made some sort of reference to nature. Hardy wrote poems and novels. His novels are largely known, his novels were influenced by society, and the main factors within society were the class system for the rich and the poor and inequality and discrimination for women. Hardy got married to his first wife Emma in 1874, although the beginning of their marriage got off to a brilliant start, it was not a very happy marriage for the rest of their time together. Emma inspired Hardy's writing. During his marriage with Emma, he became unfaithful to her and had an affair with a lady called Florence Emily Dougdale, when they met, Florence was at the age of 28. In 1912, Hardy lost his wife, Emma and his sister, two years after Emma died, 1914. Hardy then married Florence and bought her back to her his house, the house he had lived in with his first wife. All of this affected Hardy's poetry, which became more cathartic. We see how the following events affect his poetry in the 3 poem: The Going, The Voice and the poem At Castle Boterel. The poem 'The Going' tells us about a woman who died, and Hardy had many unresolved questions yet to ask her. The poem opens with the introduction to the idea that woman in this poem gave Hardy no clue that she was leaving: "Why did you give no hint that night, ... ...read more.

or reader could interpret the woman as a very unusual greeting, it could show that, at this point of time (December 1912) is in control of hid emotions. The word "Woman" can also create a feeling of loss because, she has died and he has bereaved her, he does not feel close to her no more. So the only way he feels he can greet her, is with the cold word, in this context, "Woman". We could also interpret the way he says "Woman", shows a sense of distance. "How you call to me, call to me" (Stanza 1, Line 1) The repetition makes it seem as if he cannot quite reach her, this emphasises her intangibility, because the repetition makes it seem like an echo. It is like a feeling of mystery, an echo effect, which makes it appear as if emotions from the past are still hanging on from the past. In Stanza two, Hardy tries to demonstrate to the reader that he is hearing voices, and to him he thinks it is Emma, his first wife. Stanza two talks about a memory that Hardy can still remember and is fond of, because he remembers every last detail: "Even to the original air - blue gown" (Stanza 2, Line 8). For Hardy to remember the details of his wife's dress creates the mood of happiness and youth and reinforces memories of his late wife. We again see examples that Hardy's emotion from the past are still clinging on to him, because he is desperate to see and hear her again. "Can it be you that I hear? ...read more.

In that hill's story" (Stanza 4, Line 17 & 18), "A time of quality, since or before, In that hill's story?" (Stanza 4, line 17 & 18) When Hardy uses a comparison on time "since or before" he makes a contrast of time. He makes it seem to the audience that in that moment of time, was the most magical or breathtaking event that ever occurred in the hill's history. That quote shows how Hardy feel, he is at loss, the loss of his wife, that they can never have moments again like, the moments they shared on the hill together again. This is how Hardy shows loss and regret. Further down the poem, in the sixth stanza we see that Hardy feels regret of loosing Emma: "One phantom figure Remains on the slope, as when that night Saw us alight" (Stanza 6, Line 28 & 29) And by using that quite Hardy is trying to illustrate that even if he forgets Emma, the hills are evidence that Hardy and Emma were at one point in time together and happy. And in the last stanza, we see that Hardy is finally trying to move on when he says: "for my sand is sinking," (Stanza 6, Line 33). When Hardy says this it creates an imagery that the sand symbolises or represents his love and his love for Emma is slowly sinking and fading away that is how Hardy shows loss and regret in his poems. Hardy shows the feeling of loss and regrets in his poems, by using nature and objects to symbolise the way he feels. I think he uses nature and other objects to try and describe his feelings of loss and regret because nature and the other techniques he uses add deeper meaning to his feelings. Taranjit Kaur Bedi Thomas Hardy English Coursework ...read more.