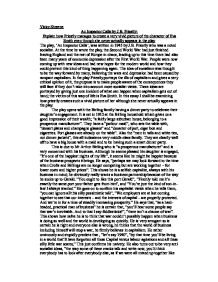 Explain how Priestly manages to create a very vivid picture of the character of Eva Smith even though she never actually appears in the playThe play, 'An Inspector Calls', was written in 1

Vicky Shreeve An Inspector Calls by J.B. Priestly: Explain how Priestly manages to create a very vivid picture of the character of Eva Smith even though she never actually appears in the play The play, 'An Inspector Calls', was written in 1945 by J.B. Priestly who was a noted socialist. At the time he wrote the play, the Second World War had just finished leaving England and the rest of Europe in chaos, leading up to this time there had also been many years of economic depression after the First World War. People were now coming up with new ideas and had new hopes for the modern world and how they could prevent this kind of thing happening again. The idea of socialism was thought to be the way forward by many, believing the wars and depression had been caused by rampant capitalism. In the play Priestly portrays the ills of capitalism and gives a very critical opinion of it, the purpose is to make people aware of the consequences they will face if they don't take into account more socialist views. These ideas are portrayed by giving just one incident of what can happen when capitalism gets out of hand; the victim of this way of life is Eva Smith. In this essay I shall be examining how priestly creates such a vivid picture of her although she never actually appears in the play. The play opens with the Birling family having a dinner party to celebrate their daughter's engagement. It is set in 1912 at the Birling household which gives us a good impression of their wealth; "a fairly large suburban house, belonging to a prosperous manufacturer". They have a "parlour maid", who sets the table with, "dessert plates and champagne glasses" and "decanter of port, cigar box and cigarettes. Port glasses are already on the table". Also the "men in tails and white ties, not dinner-jackets", this all indicates a very middle class family. ...read more.

He did it out of pity, not to keep her as his mistress, but it was "inevitable." So they became lovers, "She was young and pretty and warm-hearted - and intensely grateful. I became the most important person in her life." Gerald says he did have feelings for her but, "I didn't feel about her as she felt about me." This relationship shows how very lonely she was because of how much she appreciated Gerald's company and how he became so important to her. We learn how desperate for money she was to have gone to the Palace theatre; things were going really badly for her which was why she was so grateful Gerald helped her. However she remained proud and didn't ask for help, she only took it when Gerald insisted. The problem with the relationship was that Gerald was always in control, he was the one with status and money, she was dependant on him and admired him so much, he provided for her. This meant that he ended it, he was in control, "I broke it off definitely", "she was - very gallant - about it." "She told me that she'd been happier than she'd ever been before - but that she knew it couldn't last - hadn't expected it to last." This shows that she really loved Gerald but knew they couldn't have a real relationship between such a class gap, she always knew he was of a higher class than her. She is so used to getting the bad luck she is prepared for it this time and just accepts it. She had been very sensible and "saved a little money during the summer - she'd lived very economically on what I'd allowed her." This shows she'd grown to think ahead and expect the worst, she was very cautious. The inspector then tells how afterwards she'd gone away, "to some seaside place", "She had to go away and be quiet and remember "just to make it last longer". ...read more.

She is a lively, middle class girl who could do so well for herself if she wasn't so unlucky; she is just trying desperately to make a living. She seems very different to the other characters because she is from a completely different class, and she is the victim so we feel sorry for and they are the bullies. Whether or not she is more than one person it doesn't matter because Eva stands for all poor, working class people who have been mistreated. She is more of a symbol then a character, which is another thing that makes her different to the other characters in the play. The purpose of her character is to make us feel really sorry for her; she shows what can happen when one person is unlucky enough to be mistreated by so many people. It is her and our sympathies for her that shock us that every little selfish thing we do can lead to such a horrible end. The fact she could be more than one person just makes us see that these things probably affect different people in small ways everywhere, but that doesn't matter because we shouldn't do them as they might happen to one person which could destroy them. This final idea shows that no matter how trivial we may think these little acts of capitalism are they could be fatal. Priestly is putting across the idea we must urgently become more socialist and we have to look out for each other. He is trying to appeal to every one of us to try and be more socialist to save all those poor people who end up worse off from our behaviour. The Inspector has already warned of war and a revolution, the audience know this has really happened and this play tells them why it happened, because of rampant capitalism by everyone. He is saying that everyone together with all their little acts of capitalism led to the war. This idea was meant to put people off capitalism, and put forward the new ideas of socialism. ?? ?? ?? ?? ...read more.