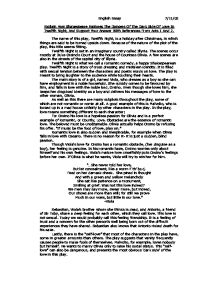 Explain How Shakespeare Explores The Dangers Of The Dark Side Of Love In Twelfth Night, And Support Your Answer With References From Acts 1 And 2.

Explain How Shakespeare Explores The Dangers Of The Dark Side Of Love In Twelfth Night, And Support Your Answer With References From Acts 1 And 2. The name of this play, Twelfth Night, is a holiday after Christmas, in which things are said to be turned upside down. Because of the nature of the plot of the play, this title seems fitting. Twelfth Night is set in an imaginary country called Illyria. The scenes occur mostly at Duke Orsino's Court and the house of Countess Olivia. A few scenes are also in the streets of the capital city of Illyria. Twelfth Night is what we call a romantic comedy, a happy Shakespearean play. Twelfth Night is a story of cross dressing and mistaken identity. It is filled with sexual tension between the characters and poetic words on love. The play is meant to bring laughter to the audience while touching their hearts. The main story is of a girl, named Viola, who dresses as a boy so she can have employment in a noble household. ...read more.

In his romantic haze, Orsino worries only about himself and his own feelings. Viola's mature love unselfishly puts Orsino's feelings before her own. If Olivia is what he wants, Viola will try to win her for him. "...She never told her love, But let concealment, like a worm i' th' bud, Feed on her damask cheek. She pined in thought And with a green and yellow melancholy She sat like patience on a monument, Smiling at grief. Was not this love indeed? We men may say more, swear more, but indeed, Our shows are more than will; for still we prove Much in our vows, but little in our love." -Viola Sebastian, Viola's brother whom she thinks is dead, and Antonio, a friend of Sir Toby, share a deep feeling for each other, which they call love. This love is not sexual. Today we would probably call this feeling friendship. It is a feeling of trust and a concern for the other person's well being born out of the difficult experiences they have shared. ...read more.

Various characters claim to suffer painfully from being in love, or, rather, from the sadness of unrequited love. At one point, Orsino depicts love glumly as an "appetite" that he wants to satisfy and cannot; at another point, he calls his desires "fell and cruel hounds". Olivia, bluntly, describes love as a "plague" from which she suffers terribly. These metaphors contain an element of violence, further painting the love-struck as victims of some random cruel joke. Even the less melodramatic Viola sighs unhappily, "My state is desperate for my master's love". This desperation has the potential to result in violence-as in Act V, scene 1, when Orsino threatens to kill Cesario because he thinks that Cesario has forsaken him to become Olivia's lover. This is one of many examples of the dark side of love leading to serious violence. In conclusion, Shakespeare explores the dark side of love by demonstrating the pain and anguish, which it causes, as well as through ambiguous relationships such as Sebastian and Antonio. The cross dressing is a powerful theatrical device to present women as men but retaining the personality of a woman in love. English Essay 7/11/02 ...read more.