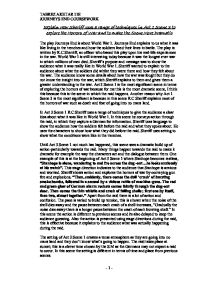 Explain How Sheriff uses a range of techniques in Act 1 Scene 3 to explore the Horrors of War and to make the Scene More Dramatic The play Journeys End is about World War 1. Journeys End explains to us what it was like living in the trenches and how the soldiers lived their lives in battle. The play is written by R.C Sherriff, an officer who based this play upon his real-life experiences in the war. World War 1 is still interesting today because it was the longest ever war in which millions of men died. Sheriff's purpose and message was to show the audience what it was really like in World War 1. Sheriff wanted to explain to the audience about what the soldiers did whilst they were there and how they felt about the war. The audience know some details about how the war was fought but they do not know the insight into the war, which Sheriff explains to them and gives them a greater understanding to the war. Act 3 Scene 1 is the most significant scene in terms of exploring the horrors of war because for me this is the most dramatic scene, I think this because this is the scene in which the raid happens. ...read more.

The pace is varied to build up tension, this is shown when the noise of the shell dies away and the pause between each crash of a shell increases, "Gradually the noise dies away-there is a longer pause between the crash of each bursting shell." In this scene the action is different to previous scenes and its also delayed to keep the audience guessing. Also the action is presented using stage directions-during the raid, this is effective because it explains to the audience what was actually happening during the raid. The setting of Act 3 Scene 1 creates a tense atmosphere as they are going into no mans land and they don't know what's going to happen. The raid takes place at sunset; this is a clever time chosen by the S.M as the Germans may not expect a raid to occur. In this scene the setting is different in terms of time and place from previous scenes. In this scene characters show signs of fear, hesitation and anxiousness-this is different from previous scenes. These are shown at the beginning of the scene and when Stanhope reveals that Osborne is dead, "Stanhope is alone, wandering to and fro across the dug-out...he looks anxiously at his watch" and "Oh I say, I'm sorry! ...read more.

In this scene Sheriff uses language to make the scene dramatic and explore the horrors of war. One horror of war which he explores using language is trying not to think of the horrors, "And now let's forget all about it for-(he looks at his watch)-for six minutes." This is when Raleigh and Osborne were talking about the raid and they think the best thing to do would be to forget about the raid. Sheriff's attitude to war was that it was a hard-fought war and the soldiers struggled. At first others attitudes to war would be that it was a battle for four years and then they stopped the war at Christmas but now they will understand how the soldiers felt whilst fighting in World War 1. Act 3 Scene 1 is dramatic because it for the first time there is action. Sheriff explores the horrors of war in a number of ways through action, character and setting. I feel this scene gives the audience a greater understanding of what the war was about. This play/scene is still relevant today because it explores the horrors of war and shows us how the soldiers felt during the war. ?? ?? ?? ?? TABREZ AKHTAR 11E JOURNEYS END COURSEWORK - 1 - ...read more.