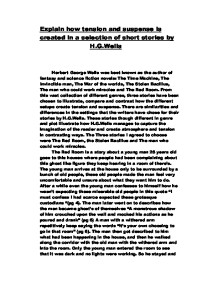 Explain how tension and suspense is created in a selection of short stories by H.G.Wells.

Explain how tension and suspense is created in a selection of short stories by H.G.Wells Herbert George Wells was best known as the author of fantasy and science fiction novels: The Time Machine, The Invincible man, The War of the worlds, The Stolen Bacillus, The man who could work miracles and The Red Room. From this vast collection of different genres, three stories have been chosen to illustrate, compare and contrast how the different setups create tension and suspense. There are similarities and differences in the settings that the writers have chose for their stories by H.G.Wells. These stories though different in genre and plot illustrate how H.G.Wells manages to capture the imagination of the reader and create atmosphere and tension in contrasting ways. The Three stories I agreed to choose were The Red Room, the Stolen Bacillus and The man who could work miracles. The Red Room is a story about a young man 28 years old goes to this houses where people had been complaining about this ghost like figure they keep hearing in a room of there's. The young man arrives at the house only to be surrounded by a bunch of old people, these old people made the man feel very uncomfortable and unsure about what they want him to do. ...read more.

The stolen Bacillus is set in 18th century London. The hysterical and social context of the story plays a significance part in creating tension and suspense. A social context that creates fear throughout the story In contrast to Red Room, which concentrates on physical details which make the suspense. The Stolen Bacillus is about a bacteriologist who one day gets a visit from a very keen man. The scientist shows the man around his laboratory and then shows him a deadly disease called cholera that can not be cured, then a gleam of satisfaction shone upon the visitors face. Then the scientist realised that he could have a bit of fun with the visitor, so he decided to show him more (The visitor still thinking this bacteria could wipe out and kill loads of people). Then the scientist gives the visitor the bottled cholera to the visitor whilst he goes and helps his wife with it, when the scientist gets back he unsurprisingly forgets that he gave the cholera to the visitor. Then all of a sudden the visitor realised the time and had to go. Not until the visitor had left did the bacteriologist (scientist) ...read more.

George made a lamp turn upside down without smashing and the candle not going out. The characters description is clown like even the name of the person e.g. "George McWhirter Fotheringay" This makes you think even more of a comic tone. At the beginning it seems the story is going no was it's just a few bored locals sat in a pub but then one challenges another. That challenge was for him to levitate a lamb, as the reader this builds up suspense to see if the man succeeds and does the duty. As you may see the story has a different kind of tension and suspense built into it. This story isn't a horror it's a comedy looking at tension and suspense from a completely different point of view. The climax of the story although cataclysmic still remains an element of fantasy. An example of this is when George talks about miracles when we know that there can't happen so this encourages us not to take the story serious "How bout miracles now?" The three texts discussed in detail provide examples of the author's ability to translate fear and fear of the impossible into plausible and entertaining stories. Each extensively using simile and metaphors to heighten tension and create atmosphere. Each story contrast with the others not only in pot but in technique and method in creating tension and suspense. ...read more.