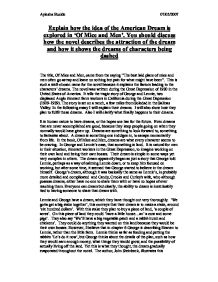 Explain how the idea of the American Dream is explored in 'Of Mice and Men'. You should discuss how the novel describes the attraction of the dream and how it shows the dreams of characters being dashed

Explain how the idea of the American Dream is explored in 'Of Mice and Men'. You should discuss how the novel describes the attraction of the dream and how it shows the dreams of characters being dashed The title, Of Mice and Men, came from the saying "The best laid plans of mice and men often go astray and leave us nothing but pain for what might have been". This is such a well-chosen name for the novel because it explains the factors leading to the characters' dreams. The novel was written during the Great Depression of 1930 in the United States of America. It tells the tragic story of George and Lennie, two displaced Anglo itinerant farm workers in California during the Great Depression (1929-1939). The story is set on a ranch, a few miles from Soledad in the Salinas Valley. In the following essay I will explain their dreams. I will also show how they plan to fulfil these dreams. Also I will clarify what finally happens to their dreams. It is human nature to have dreams, or the hopes one has for the future. Even dreams that are never accomplished are good, because they keep people going on when they normally would have given up. Dreams are something to look forward to, something to fantasize about. A dream is something one indulges in, to escape momentarily from life. In the book, Of Mice and Men, dreams are what every character seems to be craving. In George and Lennie's case, that something is land. It is natural for men in their situation, itinerant workers in the Great Depression, to imagine working on their own land and being their own bosses. Their dream is simple in some ways yet very complex in others. The dream apparently began as just a story that George told Lennie, perhaps as a way of calming Lennie down, or to keep him focused on working, but after some time, it seemed that George started to believe in the dream himself. ...read more.

But to top the big burden of loneliness on her, she discovers that her husband "ain't a nice fella," and that there is no one to care for her. She also dreams of being accepted 'Ain't I got a right to talk to nobody? Whatta they think I am anyways?' this makes the reader feel the sorrow of this woman whose dreams have been smashed to smithereens. The American Dream, at this point, probably doesn't sound like it is going to happen. 'Hard work can lead to a better life', Curley's Wife is working hard to make friends and to be accepted for the only woman on the ranch. Instead of something to call her own, she wants fame 'a show come through, an' I met one of the actors. He says I could go with the show'. Her dream of fame is more modern like a 20th century dream of fame rather than a 1930s dream of fame. She also wants fortune and admiration 'Nother time I met a guy....He says he was gonna put me in the movies. Says I was a natural. But with all this sudden faith comes her downfall 'Soon's he got back to Hollywood he was gonna write to me about it...I never got that letter.' This shows that Curley's Wife had high hopes of achieving things just like the other characters. It is important to keep dreams alive, even if they are unrealistic. Her dreams come to an abrupt holt when she makes the biggest mistake of her life by letting Lennie touch her hair. 'Let go...You let go'. This ends with her getting killed. Curley's wife shares her secret dream of being a performer with Lennie, only to have that dream shattered, quite similar to her neck. She is not a storybook wife, and that is what Curley wants. Curley's Wife's dream is in a matter of fact, hopeless because it is a very na�ve dream. ...read more.

In some ways Crooks' dream is hopeless and isn't hopeless because in 1930 even though people hated black people, Crooks' found a friend in George and Lennie. It wasn't until 1960 that black people finally got understood by help from the Civil Right Movement, led by Martin Luther King. Curley also has a dream that lots of 'short people' have, to be bigger. Curley seems very bitter about being short, and he tries to make himself out to be the tough guy on the ranch. 'Well, nex' time you answer when you're spoke to.' This suggests that Curley thinks he has a lot of authority, being the boss' son, but being short has its disadvantages because all the people he picks fights with on the ranch are always bigger than him, 'Curley's like a lot of little guys. He hates big guys. He's alla time picking scraps with big guys'. His wife is the only negative aspect to his dream. The American Dream doesn't really correspond to Curley because he isn't one of the representative characters, like George and Lennie the itinerant workers and Curley's Wife the only women and Crooks the black stable buck and Candy the old swamper. Dreams can build one up with hope and excitement, but they can also tear one down with disappointment at the dream failing to come true. Curley picks a fight with Lennie, and the main reason for this is Lennie's size. Curley's dream is in many ways hopeless because no one can determine how high someone will turn out. Curley will just have to deal with being small. In addition, in many ways it is more of an advantage being small. In conclusion, the American Dream is really a figment of everyone's imagination, except for those lucky few who strike it rich or win the lottery. "I never got that letter," she said. That was their American Dream, one which didn't come true. To put it shorter, even though the American Dream doesn't always mean true happiness, it's nice to have hope sometimes. ?? ?? ?? ?? Ayiesha Buckle 07/05/2007 ...read more.