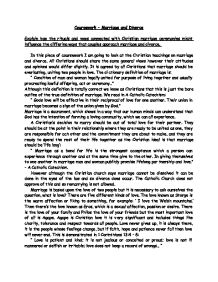 Explain how the rituals and vows connected with Christian marriage ceremonies might influence the differing ways that couples approach marriage and divorce.

Coursework - Marriage and Divorce Explain how the rituals and vows connected with Christian marriage ceremonies might influence the differing ways that couples approach marriage and divorce. In this piece of coursework I am going to look at the Christian teachings on marriage and divorce. All Christians should share the same general views however their attitudes and opinions would differ slightly. It is agreed by all Christians that marriage should be everlasting, uniting two people in love. The dictionary definition of marriage is: " Condition of man and woman legally united for purpose of living together and usually procreating lawful offspring, act or ceremony..." Although this definition is totally correct we know as Christians that this is just the bare outline of the true definition of marriage. We read in A Catholic Catechism: " Gods love will be effective in their reciprocal of love for one another. Their union in marriage becomes a sign of the union given by God." Marriage is a sacrament, which shows in a way that our human minds can understand that God has the intention of forming a loving community, which we can all experience. A Christian's decision to marry should be out of total love for their partner. They should be at the point in their relationship where they are ready to be united as one, they are responsible for ach other and the commitment they are about to make, and they are ready to spend the rest of their life together as the Christian ideal is that marriage should be 'life long': " Marriage as a bond for life is the strongest acceptance which a person can experience through another and at the same time give to the other. In giving themselves to one another in marriage man and woman publicly promise lifelong partnership and love." - A Catholic Catechism. However although the Christian church says marriage cannot be dissolved it can be done in the eyes of the law and so divorce does occur. ...read more.

The Wedding service begins immediately following the Betrothal service. The bride and groom are handed candles, which they hold throughout the service. The candles symbolise the spiritual willingness of the couple to receive Christ. The right hand of the bride and groom are joined when the priest reads the prayer that beseeches God to " join these thy servants, unite them in one mind and one flesh." The hands are kept joined throughout the service to symbolise the 'oneness' of the couple. The service of the Crowning, which follows, is the climax of the Wedding Service. The crowns are signs of glory and honour. The bride and groom are crowned as king and queen of their own little kingdom, the home - domestic church, which they will rule with the fear of God, wisdom, justice and integrity. The reading of the Epistle and the Gospel follows the service of Crowning. The Gospel reading describes the marriage of Cana of Galilee. Here Christ converted water into wine, in remembrance of this blessing wine is given to the couple. This is called the 'common cup'. It symbolises the mutual sharing of joy and sorrow, it is the token of a life of harmony. The drinking of this wine serves to impress upon the couple that from that moment on they will share everything in life, joys as well as sorrows. Their joys will be doubled and their sorrows halved, as they will be shared. The priest then leads the bride and groom in a circle around the table on which are placed the Gospel and the Cross. The husband and wife are taking their first steps as a married couple, and the Church, in the person of the priest, leads them in the way they must walk. Their walk symbolises the fact that the way of Christian life is a perfect orbit around the centre of life, which is Jesus Christ. The couple return to their places and are both in turn blessed by the priest. ...read more.

Sex should be an expression of lasting union between two people; it is a gift, which should not be abused. Sex outside the marriage can lead to terrible consequences both physically and emotionally. If the Christian ideal was followed the divorce rate would decrease, there would less chance of catching a sexually transmitted infection and there would be less unwanted pregnancies/illegitimate babies. The basic Roman Catholic understanding on sex outside the marriage is clearly stated in A Catholic Catechism and in the Humanae Vitae. In the Humanae Vitae it says: " Sex has 2 functions: to express the love between husband and wife and to give life to children. In sexual intercourse the love between husband and wife becomes creative, like the love of God. " This basically sums up the beliefs of Christians and how they should treat sexual intercourse in their everyday lives. However, having said this the views of different branches of Christianity do differ greatly on this issue. The Roman Catholic Church is very strict as, in the case extra-marital sex, no public promises have been made, and neither the couple or the family nor the friends can be sure of the future. This is particularly serious if a child is conceived, as there is no sacrament. Other Christians for example the Anglicans, agree that under certain circumstances sexual intercourse between a couple who are not married but who love each other and who intend to create a life together is morally acceptable. To sum up I would say that Christians generally believe that sex outside marriage is wrong not just because of the great number of problems it causes but also because Jesus spoke out against it. All Christians should believe and be prepared to argue that sex is a beautiful gift from God demanding responsibility, commitment and total love. They should believe that it is always wrong to use a person as a thing, that sexual intercourse is very special as it creates new life and that sex is the most beautiful expression of a deep, loving, life-long union between two people. ...read more.