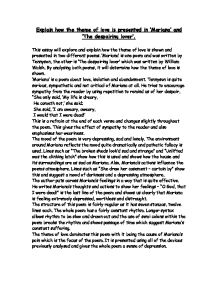 Explain how the theme of love is presented in 'Mariana' and 'The despairing lover'.

Explain how the theme of love is presented in 'Mariana' and 'The despairing lover'. This essay will explore and explain how the theme of love is shown and presented in two different poems. 'Mariana' is one poem and was written by Tennyson, the other is 'The despairing lover' which was written by William Walsh. By analysing both poems, it will determine how the theme of love is shown. 'Mariana' is a poem about love, isolation and abandonment. Tennyson is quite serious, sympathetic and not critical of Mariana at all. He tries to encourage sympathy from the reader by using repetition to remind us of her despair, "She only said, 'My life is dreary, He cometh not,' she said; She said, 'I am aweary, aweary, I would that I were dead!' This is a refrain at the end of each verse and changes slightly throughout the poem. ...read more.

The whole poem has a fairly constant rhythm. Longer syntax allows rhythm to be slow and drawn out and the use of semi colons within the poem breaks the rhythm and shows passage of time which suggest Mariana's constant suffering. The theme of love dominates this poem with it being the cause of Mariana's pain which is the focus of the poem. It is presented using all of the devices previously analysed and gives the whole poem a sense of depression. The poem "The despairing lover" is again a poem about love and rejection. This poem however is more mocking than 'Mariana' and is less serious, "poor Damon" written near the beginning of the poem suggests this. A similarity between the two poems is that they both have a suicidal feeling to them and a depressing atmosphere. Words such as "despair, languish and anguish" show this. ...read more.

In this poem, the protagonist, gains realisation at the end much quicker than in 'Mariana'. This again shows the authors view on love quite well, that love is not forever. The structure of this poem is completely different to that in 'Mariana'. It has shorter syntax and a much quicker pace with regular punctuation. Also, there is no repeated refrain in this poem which makes it less depressing and tedious. The theme of love is presented in a more mocking way in this poem, whereas in 'Mariana' the poet is much more serious. I believe both poems show this theme very well, but 'The despairing lover' does so best as it is a less tedious poem and much shorter, making it easier to read and understand. 'Mariana' is quite long-winded and wordy which gives it, its harder-to-understand sense. Therefore I believe that "The despairing lover" has the best influence and affect on the reader in describing and presenting the theme of love. Paul Taylor 10L ...read more.