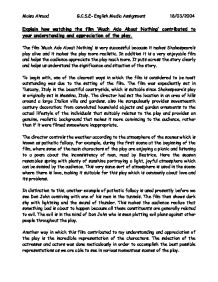 Explain how watching the film 'Much Ado About Nothing' contributed to your understanding and appreciation of the play.

Explain how watching the film 'Much Ado About Nothing' contributed to your understanding and appreciation of the play. The film 'Much Ado About Nothing' is very successful because it makes Shakespeare's play alive and it makes the play more realistic. In addition it is a very enjoyable film and helps the audience appreciate the play much more. It puts across the story clearly and helps us understand the significance and situation of the story. To begin with, one of the clearest ways in which the film is considered to be most outstanding was due to the setting of the film. The film was expediently set in Tuscany, Italy in the beautiful countryside, which is suitable since Shakespeare's play is originally set in Messina, Italy. The director had set the location in an area of hills around a large Italian villa and gardens. also He scrupulously provides seventeenth century decoration; from convoluted household objects and garden ornaments to the actual lifestyle of the individuals that suitably relates to the play and provides an genuine, realistic background that makes it more convincing to the audience, rather than if it were filmed somewhere inappropriate. The director controls the weather according to the atmosphere of the scenes which is known as pathetic fallacy. For example, during the first scene at the beginning of the film, where some of the main characters of the play are enjoying a picnic and listening to a poem about the inconsistency of men, read by Beatrice. ...read more.

All three actors perform this scene extremely cleverly and they do this by using Shakespeare's limited stage directions and unresponsive words to make the scene much more noticeable and pleasurable. This is done by all three actors putting a lot of feeling and exaggeration into their lines and facial expressions which lets the audience know how they are feeling. Claudio, Leonato and Don Pedro are able to get across to the audience the fact that they are deceiving Benedick, and that makes Benedick's reactions to the situation much more humorous. Benedick enters the garden with a folding chair, which he endeavors to set up while Claudio, Leonato and Don Pedro talk between themselves. Benedick finally does set up the chair, and sits on it but almost immediately when Don Pedro states that Beatrice is in love with Benedick he falls off the chair in shock. This evil spirit states that Benedick is shocked and startled at this piece of information and adds humour to the film. Benedick again proves a source of amusement when he uses an unprepared bird call to hide his shriek when he overhears that Leonato and the rest think him too proud to love Beatrice. Benedick's uses many facial expressions convey his fusion of feelings very effectively when he listens to Don Pedro talking, such as surprise and amazement, and shame at himself, and help to liven up this scene. ...read more.

Firstly in this scene the director brings together dancing, music and romance to make the scene more lively as well as more fascinating and tempting to the audience. The success in this scene is where director cunningly uses different masks for different characters, each mask portraying the personalities of the owner. Benedick's mask is of a funny, inane face, which suggests to the audience the view that Beatrice has of him; Claudio's is of a cupid, which is sulking and looks puerile which tells the audience that Claudio is immature and sensitive; and Don Jon's is of a red demon, which signifies his malice. Another reason why the mask party contributed to my understanding and appreciation of the play is because the mask party in its entirely is a representation of deceit and deception. In conclusion, watching the film Much Ado About Nothing really contributed to my understanding and appreciation of the play. This is because of the representation of the characters, the humour as well as the beautiful scenery and settings. The director of Much Ado About nothing has made the whole play much more realistic and authentic and appealing to the audience. I would not have such positive opinion of the play if I hadn't watch the film and I am very lucky to have watched and been able to understand one of Shakespeare's utmost plays. Maisa Ahmad G.C.S.E- English Media Assignment 18/03/2004 ...read more.