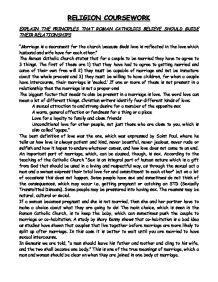 Explain the Principles That Roman Catholics Believe Should Guide Their Relationships.

EXPLAIN THE PRINCIPLES THAT ROMAN CATHOLICS BELIEVE SHOULD GUIDE THEIR RELATIONSHIPS "Marriage is a sacrament for the church because Gods love is reflected in the love which husband and wife have for each other." The Roman Catholic Church states that for a couple to be married they have to agree to 3 things. The first of these are 1) that they have had to agree to getting married and came of their own free will 2) they must be capable of marriage and not be immature about the whole process and 3) they must be willing to have children, for when a couple have intercourse, their marriage is 'sealed.' If one or more of these is not present in a relationship then the marriage is not a proper one! The biggest factor that needs to also be present in a marriage is love. The word love can mean a lot of different things. ...read more.

The main choice, which is seen in the Roman Catholic Church, is to keep the baby, which can sometimes push the couple to marriage or co-habitation. A study by Mary Kenny shows that co-habitation is a bad idea as studies have shown that couples that live together before marriage are more likely to split up after marriage. In this case it is better to wait until you are married to have sexual intercourse. In Genesis we are told, "a man should leave his father and mother and cling to his wife, and the two shall become one body." This is one of the true meanings of marriage, which a man and woman should be clear on when they are joined in one body at marriage. Catholics should be clear about fornication. Fornication is when a person is clear on the Roman Catholic Churches teaching about sex before marriage. Also a person should understand that love is for life and not until we get bored with it. ...read more.

If they file for a divorce, it may turn into a bitter feud between the two parties whereas, if they apply for an annulment, which means that there never was a proper marriage to begin with, but the disadvantage in annulments is that it may take anything up to 7 years for an annulment to come through. To get an annulment, the pair and a church panel has to agree that there was never a real marriage in the first place. If they both agree on that then they have to give a reason why, this reason could be that the other partner would not have a child or they had been forced into the marriage at the start or that on the terms of the case, the annulment may now be granted. According to the law of state-"Marriage is the voluntary union for life of one man and one woman to the exclusions of all others. I believe that this statement is true as it explains a marriage between two people! RELIGION COURSEWORK ...read more.