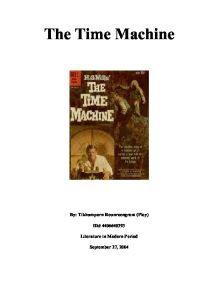 Explain the relationship between the Eloi and the Morlocks, and the main characters of each. What did you think of each species? Did you sympathize with either?

The Time Machine By: Tikhumporn Rounroengrom (Ploy) ID# 4406640393 Literature in Modern Period September 27, 2004 Explain the relationship between the Eloi and the Morlocks, and the main characters of each. What did you think of each species? Did you sympathize with either? The Time Machine was inventively written as a social critique of the Victorian Era in 1895 by Herbert George Wells, the father of modern science fiction. Wells used the novel to get the messages across on social and political problems at the time when London was on top of the world. The novel criticized mainly on communism, imperialism, capitalism, as well as Social Darwinism. The Time Machine was an adventurous science fiction novel about a Time Traveler, the inventor of a time machine who traveled to the year 802,701 A.D. In the course of his journey, he saw the degeneration and the separation of mankind through the two evolved species, the Eloi and the Morlocks, in which their relationship and their significance would be explained in this essay. When the Time Machine landed in the future, the Elois were the first creature that the Time Traveler had come across. Their name was from the imitation of the word "Elite" and they were the evolved upper classes, the protagonist, who lived above the ground. The Elois were described as being beautiful, peaceful, and graceful. ...read more.

They were the true master at the time and they spoke differently from the Elois. The idea of degeneration was also apparent with the evolved Morlocks. "The old instinctive dread of wild beasts came upon me. I clenched my hands and steadfastly looked into the glaring eyeballs. I was afraid to run," (Wells, 48). The Morlocks were cruel, savage, and uncivilized. Moreover, they were strong, rough, and scary. Physically, the Morlocks were portrayed as having white skin, gigantic red-grayish eyes, and hairy back. They were also described as being ape-like which was opposed to the studies of Charles Darwin which stated that human was evolved from monkeys. This gave them the ability to run and climb so fast to the extent that the Time Traveler thought that they looked like human spiders. The differences between the Morlocks and the Elois could be seen as an attack on capitalism and imperialism as these created major problems according to Wells who was a socialist. Wells believed in the opportunity for anyone to be wealthy. "At first, proceeding from the problems of our own age, it seemed clear as daylight to me that the gradual widening of the present merely temporary and social difference between the Capitalist and the Laborer, was the key to the whole position," (Wells, 50). The relationship between the Morlocks and the Elois could be compared to the widen gap between the upper class and the lower class English during the time of H.G. ...read more.

It must be totally depressing as they had to sleep in fear every night. On the other hand, I felt less sympathize with the Morlocks because the Time Traveler described that they were used to their own ways of living and they were the master after all. "Such of them as were so constituted as to be miserable and rebellious would die; and, in the end, the balance being permanent, the survivors would become as well adapted to the conditions of underground life, and as happy in their way, as the Upper-people were to theirs," (Wells, 52). Nonetheless, a part of me still felt that they must have suffered quite a lot along the way. The Time Machine definitely gives an eye-opening experience for the people who were unaware of the result from the separations of the classes in the society especially the problems which were caused by capitalism and imperialism. Through the Time Traveler, H.G. Wells described his "grieved to think how brief the dream of human intellect had been. (Wells, 81). He believed that it committed suicide along the process of degeneration in which he powerfully described in this novel. He successfully criticized the Victorian Era in a way that was entertaining, exciting, and educating. Even if Wells meant for the novel to criticize the certain era, it can still be classically and universally use since this problems still last to these days. ...read more.