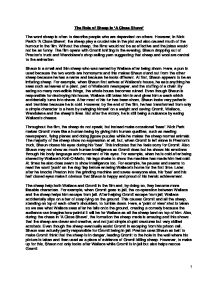 Explain the Role of Sheep in the Wallace and Gromit films.

The Role of Sheep in 'A Close Shave' The word sheep is often to describe people who are dependent on others. However, in Nick Park's 'A Close Shave', the sheep play a crucial role in the plot and also caused much of the humour in the film. Without the sheep, the films would not be as effective and the jokes would not be as funny. The film opens with Gromit knitting in the evening, Shaun dropping out of Preston's truck and Wendolene's shop selling yarn suggesting that sheep and wool are central to the animation. Shaun is a small and thin sheep who was named by Wallace after being shorn. Here, a pun is used because the two words are homonyms and this makes Shaun stand out from the other sheep because he has a name and because he looks different. At first, Shaun appears to be an irritating sheep. For example, when Shaun first arrives at Wallace's house, he eats anything he sees such as leaves of a plant, part of Wallace's newspaper, and the stuffing of a chair. ...read more.

The sheep help both Wallace and Gromit in the film and, by doing so, they become more likeable characters. For example, when Gromit goes to jail, the co-operation between Wallace and the sheep helps him escape from jail. After helping Gromit escape from jail, Wallace accidentally slips on a bar of soap lying on the ground. This causes Gromit and all the sheep, standing on top of each other's shoulders, to tumble down. Here, a 'point of view' shot is taken so we see what Wallace sees after he falls onto the ground, creating a comedy because the audience can imagine how painful it will be for Wallace as all the sheep land on top of him. Also, during the chase in 'A Close Shave', the formation the sheep made is amazing and this shows that the sheep are clever and creative, and not just simple stupid creatures but very skilled acrobats. Even though the sheep eventually assist Gromit in escaping from his prison cell, Shaun was actually partly responsible for Gromit being in jail. ...read more.

This may show that he is a brave sheep and understands that Wallace wants to save them. When Wallace, Wendolene and the sheep are about to get dumped into the bath, Shaun seems to foresee this and holds on to the edges of the cart before it tips over. When Wallace is being sucked into 'Preston's Knit-O-Matic', Shaun helps Wallace out and adjusts it so Preston would get sucked in instead. Nick Park uses all these situations to illustrate Shaun's intelligence. Overall, the sheep are crucial to the film. By making sheep, characters that are usually regarded as daft animals, play a vital role and look cute, Nick Park has produced a film that hooks its audience well. Shaun saving the day but then being a nuisance by eating Wallace's cheese makes sheep seem like clever animals that can be lively and become a burden. A lot of the comedy in the film comes from the sheep and this shows that perhaps they are neither as boring nor stupid as they seem. How Nick Park presented sheep in the film shows how even the most timid person can become a hero. Word Count: 1, 097 ?? ?? ?? ?? 1 ...read more.