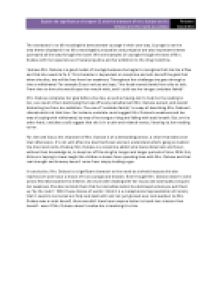 EXPLAIN THE SIGNIFICANCE OF CHAPTER 11 AND THE CHARACTER OF MRS. DUBOSE AND ITS RELEVANCE TO THE NOVEL AS A WHOLE

﻿Explain the significance of chapter 11 and the character of mrs. dubose ans its relevance to the novel as a whole Rhianne Goodchild The characters in to kill mockingbird demonstrate courage in their own way. Courage is not the only theme displayed in to kill a mockingbird; education and prejudice are also important themes portrayed all the way through the novel. We see examples of courage through the eyes of Mrs. Dubose with her experiences of racial prejudice and her addiction to the drug morphine. I believe Mrs. Dubose is a good model of courage because she began to recognise that she has a flaw and that she needs to fix it. ...read more.

Dubose owned, and overall distracting her from her addiction. The use of "undulate faintly" is a way of describing Mrs. Dubose's characteristics at that time. For instance undulate could suggest Mrs. Dubose's weakness and her way of coping with withdrawal, by way of her tongue rising and falling with each breath. But, on the other hand, undulate could suggest that she is in a calm and relaxed trance, listening to Jem reading to her. For Jem and Scout, the character of Mrs. Dubose is of a demanding person, a chore that takes over their afternoons. It?s not until after she dies that Scout and Jem understand what?s going on behind the drool and cords of saliva; Mrs. ...read more.

In conclusion, Mrs. Dubose is a significant character to the novel as a whole because she also teaches Jem and Scout a lesson of true courage and bravery. Even though Mrs. Dubose doesn't come across friendly towards the children, she stuck with dealing with her issues and eventually conquers her weakness. She also reminds them that her camellias cannot be destroyed unless you pull them up "by the roots". With these choices of words I think it is a metaphorical representation of racism; that it needs to be rooted out fully and dealt with and not just glossed over and avoided. As Mrs. Dubose was a racist herself, there wouldn't have been anyone better to teach Jem a lesson than herself - even if Mrs. Dubose doesn't realise she is teaching it to him. ...read more.