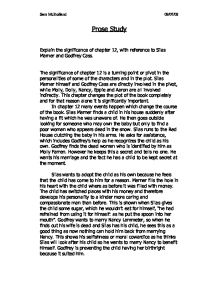 Explain the significance of chapter 12, with reference to Silas Marner and Godfrey Cass.

Prose Study Explain the significance of chapter 12, with reference to Silas Marner and Godfrey Cass. The significance of chapter 12 is a turning point or pivot in the personalities of some of the characters and in the plot. Silas Marner himself and Godfrey Cass are directly involved in the pivot, while Molly, Dolly, Nancy, Eppie and Aaron are all involved indirectly. This chapter changes the plot of the book completely and for that reason alone it is significantly important. In chapter 12 many events happen which change the course of the book. Silas Marner finds a child in his house suddenly after having a fit which he was unaware of. He then goes outside looking for someone who may own the baby but only to find a poor woman who appears dead in the snow. Silas runs to the Red House clutching the baby in his arms. He asks for assistance, which includes Godfrey's help as he recognizes the child as his own. Godfrey finds the dead woman who is identified by him as Molly Farren. However he keeps this a secret and tells no one. He wants his marriage and the fact he has a child to be kept secret at the moment. ...read more.

The positive side of this for Silas, after losing his money the villager's opinion of him has now turned as they feel he is just like them now with hardly any money. Two villagers come to comfort Silas, one of which is a young boy called Aaron, brought by his mother, Dolly Winthrop. He sings to Silas to try and cheer him up after losing his money but Marner feels no emotion towards the child. Godfrey is a kind and helpful man towards other people, "good natured man". But he is worried that his brother (Dunstan) will tell his father of Godfrey's secret marriage to Molly Farren (a poor barmaid). Dunstan threatens to tell his father, "I might tell the squire". Godfrey is forced to bribe Dunstan with the villager's taxes so he won't tell. He also gives Dunstan his horse (Wildfire) but Dunstan stakes the horse and goes missing. This makes Godfrey upset and he tells his father about him giving the villager's taxes to Dunstan but he doesn't tell him what for. Godfrey is in love with Nancy Lammeter but cannot marry her because he is married to Molly. ...read more.

Eppie only chooses to stay with Silas rather than Godfrey because she was rejected by Godfrey and accepted by Silas in chapter 12 making it a very significant chapter. Silas is rewarded for doing well while Godfrey is punished for being bad. Chapter 12 is a great "pillar" in the structure of the book as it holds the whole story together. It brings the two lives of a man mistreated by others and a man who's life is a mess together and creates the link (Eppie). These separate lives are brought together with a wild twist thus creating major changes in the main characters of the book. A moral is also run throughout the book. Those who do well are rewarded, while those who do bad are punished. This is clearly reflected in the deeds of Mr. Marner and Mr. Cass. The writer sets in motion a chain of events that not only affects Godfrey and Silas immediately in chapter 12 but also does 16 years later. Eppie becomes treasure for Silas instead of his beloved gold, while Godfrey wants Eppie to be his child after turning his back on her when he could have owned up and said she was his child. These decisions made in Chapter 12 make it a significant Chapter in the eyes of Silas Marner and Godfrey Cass. Sam Mulholland 09/07/03 ...read more.