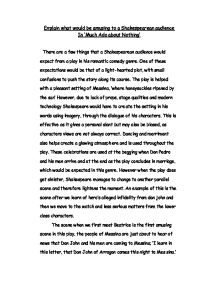 Explain what would be amusing to a Shakespearean audience In 'Much Ado about Nothing' There are a few things that a Shakespearean audience would expect from a play in his romantic comedy genre. One of these expectations would be that of a light-hearted plot, with small confusions to push the story along its course. The play is helped with a pleasant setting of Messina, 'where honeysuckles ripened by the sun' However, due to lack of props, stage qualities and modern technology Shakespeare would have to create the setting in his words using imagery, through the dialogue of his characters. This is effective as it gives a personal slant but may also be biased, as characters views are not always correct. Dancing and merriment also helps create a glowing atmosphere and is used throughout the play. These celebrations are used at the begging when Don Pedro and his men arrive and at the end as the play concludes in marriage, which would be expected in this genre. However when the play does get sinister, Shakespeare manages to change to another parallel scene and therefore lightens the moment. An example of this is the scene after we learn of hero's alleged infidelity from don john and then we move to the watch and less serious matters from the lower class characters. The scene when we first meet Beatrice is the first amusing scene in this play, the people of Messina are just about to hear of ...read more.

These techniques are still use in today's comedy with characters like Mr. Bean, which is of a similar genre situation comedy. Malapropism is the ridiculous misuse of a word through one resembling it. Dogberry uses this frequently, yet unconsciously, and much more than all of the other characters. For example, he states 'you the most desartless man' when it would have only made sense if he said deserving. This is an example of a malapropism and shows dogberry's incompetence to manage his self. This is ironic as he is not only responsible for himself but for crime in the town of Messina. We gain a sense of dogberry's character from his first lines ' are you good men and true?' we learn of his willingness to sound official but find his difficulties amusing as his inflated pride tells him how he is indeed an official significant member of the community. In a later scene (Act 4 scene 2) Conrade states 'away you are an ass, you are an ass' when talking to dogberry, and this is a final dent into the pride of dogberry. He clearly wears his heart on his sleeve and his emotions are clear as he aims to pick up the pieces and retain respect from his watch. His reply contains repetition of ass as if it were to convince himself of his capabilities. ...read more.

When Benedick says "I'st possible? Sits wind in that corner?" after hearing, through don Pedro, Claudio and Leonato, that Beatrice has allegedly declared her love for him, he appears jubilant, he does not acknowledge it was a trick and his blindness is amusing to the audience. His heart is driving him on in this scene as his priorities change and his head becomes focussed. During the play Shakespeare uses his full compliment of comical techniques in amusing the audience. These range in the slapstick and malapropisms on the night watch to the other extreme and the skirmish of higher-class wit between Benedick and Beatrice. He uses theme that run through the play, one of which is confusion, this helps drive the plot and develop the characters. The play is set/based on an idyllic society however don john gives us an alternative to the other typical characters of the time and genre. Shakespeare uses concepts that, for the time it was written, were very modern, and still stands up in today's comedy. For instance the realistic relationship between Benedick and Beatrice was not typical. This was at the time unknown however the audience both could appreciate it and relate to it. All of these aspects and types of comedy add up to give both the audience of Shakespeare and the audience of today a comedy play, with all aspects falling into the audience's expectations for a comedy of this type. ...read more.