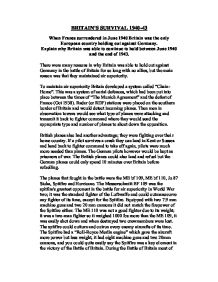 Explain why Britain was able to continue to hold between June 1940 and the end of 1943.

BRITAIN'S SURVIVAL 1940-43 When France surrendered in June 1940 Britain was the only European country holding out against Germany. Explain why Britain was able to continue to hold between June 1940 and the end of 1943. There were many reasons in why Britain was able to hold out against Germany in the battle of Britain for so long with no allies, but the main reason was that they maintained air superiority. To maintain air superiority Britain developed a system called "Chain-Home". This was a system of aerial defences, which had been put into place between the times of "The Munich Agreement" and the defeat of France (Oct 1938). Radar (or RDF) stations were placed on the southern border of Britain and would detect incoming planes. Then men in observation towers would see what type of planes were attacking and transmit it back to fighter command where they would send the appropriate type and number of planes to shoot down the opposition. British planes also had another advantage; they were fighting over their home country. ...read more.

The Spitfire had a "Roll-Royce Merlin engine" which gave the aircraft more power but less weight, it had eight machine guns and two 20mm cannons, and you could quite easily say the Spitfire was a key element in the victory of the Battle of Britain. During the Battle of Britain most of the RAF fighter squadrons were equipped with Hurricanes, although not as manoeuvrable as the Spitfire they could still easily beat a ME 110. Although it would seem that Britain had the upper hand they were overwhelmed by masses of fighters and night-raids on fighter command and landed fighters. Hitler might have won air superiority if he hadn't sought for revenge. Due to Britain's bombing of Berlin Hitler wanted to bomb London. Although at a great cost, fighter command had time to recover. On September 15th 1940 a German daylight air raid suffered great losses, this was considered the end of the "Battle of Britain". The German defeat cannot be solely based on Hitler's idiocy the British had another advantage. The German code machine called the Enigma's code was cracked. ...read more.

Heil Hitler" but bad weather delayed the German attack for several days. In the first wave the Germans made attacks against airfields and defence positions, losing 75 planes. As the amount of bombing was continuously increasing, Fighter Command was able to engage the enemy in the most effective way. The British intelligence's methods were highly criticized by those who did not have access to Enigma's information. In the Battle of Britain the German Air Force dropped over 40,000 tons of bombs on towns such as London, Liverpool, Birmingham and Coventry. British bombing losses were 20,325 wounded and 14,280 killed. The German aircraft losses were, 2,700 air craft destroyed and 600 damaged. British losses were about 900 pilots. The critical day came on the September 15th 1940 when Goering ordered a massive attack of 328 bombers and 769 fighters to deliver the final blow. With a force of 300 fighters Britain was able to destroy 187 German planes and to break the offensive. Two days later, on the 17th of September 1940, Bletchley Park (ultra's HQ) decrypted Hitler's order to abandon operation "Sea Lion" and to end the Battle of Britain. Throughout the whole period of the Battle of Britain W. Churchill had detailed advance knowledge of German battle orders. ...read more.