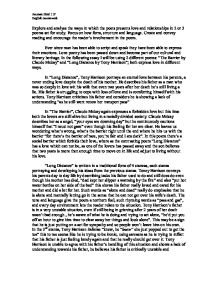 Explore and analyse the ways in which the poets presents love and relationships in 2 or 3 poems set for study. Focus on how form, structure and language. Create and convey reading and encourage the reader's involvement in the poem.

Explore and analyse the ways in which the poets presents love and relationships in 2 or 3 poems set for study. Focus on how form, structure and language. Create and convey reading and encourage the reader's involvement in the poem. Ever since man has been able to script and speak they have been able to express their emotions. Love poetry has been passed down and become part of our cultural and literary heritage. In the following essay I will be using 2 different poems: "The Barrier by Claude Mckay" and "Long Distance by Tony Harrison"; both express love in different ways. In "Long Distance", Tony Harrison portrays an eternal love between his parents, a never ending love despite the death of his mother. He describes his father as a man who was so deeply in love wit his wife that even two years after her death he's still living a lie. His father is struggling to cope with loss of love and is comforting himself with his actions. Tony Harrison criticizes his father and considers he is showing a lack of understanding "as he still went renew her transport pass" In "The Barrier", Claude Mckay again expresses a forbidden love but this time both the lovers are still alive but living in a racially divided society. ...read more.

he's aware of what he is doing and trying to act alone, "he'd put you off an hour to give him time to clear away her things and look alone". This may be a sign that he is just putting on a act for sympathy and so people won't leave him on his own. In the 3rd stanza, Tony Harrison italicise "knew, he "knew" she just popped out to get the tea" this to me seems like he is trying to be ironic, using sarcasm as he is trying to inflict that his father is just feeling lonely again and that he really should get over it. Tony Harrison is unable to agree with his father's handling of this situation and shows a lack of understanding towards his father, he believes his father is critically unstable and condemns his actions. Tony Harrison firmly states his own beliefs and doesn't understand his parent's love "I believe life ends with death". In the last stanza of the poem Tony Harrison changes the rhyme scheme and diverts the focus of the poem onto him, from ABAB he changes to ABBA to cause a larger impact on his new found beliefs. ...read more.

The poet sends across a very strong message with the last stanza and particularly in the last line. He explains "you're fair and I am dark". Even though their love is possible, unlike the relationship in "Long Distance, racism means it is forbidden and condemns them from ever being with each other. The poem is called "The Barrier" and the poem sums up the barrier as the racism between whites and blacks, it represents the social barrier between the two groups of people even though there both the same inside, just two different colours. As racism is frowned upon in today's society, the title holds a really strong message. "The Barrier" is a poem where the poet keeps telling himself that the relationship can not happen, "I must not" but it can, they just have to get over the social barrier where as in "Long Distance" a man is so drawn back by his wife's death even after 2 years he still lives a lie, a life where he pretends she is still alive but the honest truth is he's just alone and love has left him on his own. Aruman Hind 11P English coursework ...read more.