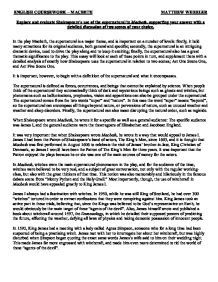 Explore and evaluate Shakespeare's use of the supernatural in Macbeth, supporting your answer with a detailed discussion of two scenes of your choice.

ENGLISH COURSEWORK - MACBETH MATTHEW WHEELER Explore and evaluate Shakespeare's use of the supernatural in Macbeth, supporting your answer with a detailed discussion of two scenes of your choice. In the play Macbeth, the supernatural is a major theme, and is important on a number of levels: firstly, it held many attractions for its original audience, both general and specific; secondly, the supernatural is an intriguing dramatic device, used to drive the play along and to keep it exciting; finally, the supernatural also has a great thematic significance to the play. This essay will look at each of these points in turn, and supplement them with a detailed analysis of exactly how Shakespeare uses the supernatural in relation to two scenes; Act One Scene One, and Act Five Scene One. It is important, however, to begin with a definition of the supernatural and what it encompasses. The supernatural is defined as forces, occurrences, and beings that cannot be explained by science. When people think of the supernatural they automatically think of dark and mysterious beings such as ghosts and witches, but phenomena such as hallucinations, prophecies, vision and apparitions can also be grouped under the supernatural. The supernatural comes from the two words "super" and "nature". In this case the word "super" means "beyond", so the supernatural can encompass all things beyond nature, or perversions of nature, such as unusual weather and weather and sleep disorders. Finally, the supernatural can also mean disrupting the natural order, such as regicide. When Shakespeare wrote Macbeth, he wrote it for a specific as well as a general audience: The specific audience was James I, and the general audience were the theatregoers of Elizabethan and Jacobean England. It was very important that when Shakespeare wrote Macbeth, he wrote in a way that would appeal to James I. James I had been the Patron of Shakespeare's band of actors, The King's Men, since 1603, and it is thought that Macbeth was first performed in August 1606 to celebrate ...read more.

In Shakespearean times people were far more aware of The Divine Right of Kings, and therefore killing a King was the next crime down from killing God. An assault on the King is an assault on God, and it was shown by Ross and the Old Man in Act 2 Scene 4 that the killing of Duncan had supernatural consequences. These consequences are an example of how nature is disordered and unnatural, and the supernatural also conveys this in a number of ways: In the opening scene, the witches talk about paradoxes such as "fair is foul and foul is fair", and they say Banquo is "lesser that Macbeth, and greater." This is Shakespeare's way of showing that things in the play are the opposite of what they seem, and that there are many double meanings to what the witches say. Even the appearance of the witches show that things are reversed and upside down, as displayed by the witches beards. Also, Shakespeare uses the interruption of natural rhythms such as sleep to show how the natural order has been interrupted. Lady Macbeth's somnambulance is a clear example of how disturbed she is over the death of Duncan, and because Lady Macbeth is always putting a front on in public laced with smiles, sleepwalking is a highly effective way of bringing out her inner turmoil. Finally, Shakespeare uses pathetic fallacy to show what effect Macbeth's actions have on the rest of the world. The stormy weather and earthquakes described once again by Ross and Old Man demonstrate that there not just a few people suffering from Macbeth's actions, it encompasses a whole nation. This essay has shown how Shakespeare uses the supernatural in a dramatic, thematic and audience-specific ways, but in order to see just how effectively he integrates into the text, it is important to look at two scenes where it is most memorably used. ...read more.

This is very similar to Macbeth's linguistic degeneration, when he addresses the Murderers in prose. Lady Macbeth's language is a highly telling manifestation of her degeneration. The contrast between her poetic, calculated persuasion of Act One to the child-like drivel of "The Thane of Fife had a wife". Lady Macbeth's final speech is of a woman who is no longer exists in the present: she is in the past reliving her memories, almost in some horrifying reverie. The fact she is reliving the past is backed up with "there's knocking at the gate", reflects a reliving of the last few moments before their act of murder was discovered. The speech is also crammed with repetition, with "come" repeated four times and "to bed" five. Finally, the phrase "give me your hand" is a perfect expression of her feelings towards her husband - she still loves him but she still feels the desire to command and control. The doctor's final speech widens the scope of Lady Macbeth's experiences to take in the whole world: "Foul whisperings are abroad" can be used to apply to the death of Lady Macbeth herself, but can also relate to the supernatural side-effects of Macbeth's regicide. After the degeneration of Lady Macbeth, one of the most powerful and vivid character in all of drama, it is the lowly doctor who talks in poetry, not his usual prose. "Unnatural deeds/ Do breed unnatural troubles" sums up the play brilliantly, but a terrifying reminder of the consequences the Macbeths have to live with. SECTION SEVEN: conclusion This essay has looked at Shakespeare's use of the supernatural in great detail, commenting on it in a thematic, dramatic and audience-specific sense and focusing in extra detail on Act 1 Scene 1 and Act 5 Scene 1. Shakespeare makes excellent use of the supernatural through witches, hallucinations, prophecies, somnambulance and freak weather. Whether they dominate the scene or not, the many manifestations of the supernatural are used precisely and effectively to add an extra dimension to Macbeth. ...read more.