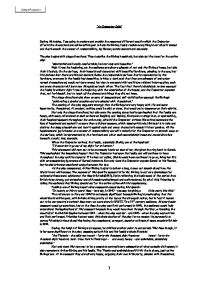 Explore and explain the numerous different ways in which the Inspector affects the characters and achieves his goal.

"An Inspector Calls" During this essay, I am going to explore and explain the numerous different ways in which the Inspector affects the characters and achieves his goal; to help the Birling family realise everything is not all as it seems and that beneath the veneer of respectability, lay hidden, untold secrets and scandals. The play begins with stage directions. They describe the Birling household, but also set the tone for the entire play: "substantial and heavily comfortable, but not cosy and homelike." Right from the beginning, we the audience are given a glimpse of not only the Birlings' home, but also their lifestyle. On the surface, their home is well decorated with beautiful furniture, pleasing to the eye, but it is obvious that there are hidden secrets. Below the respectable surface that is represented by the furniture, everyone in the family has something to hide; a dark past that they are ashamed of and under normal circumstances, would not dare reveal, but due to one man's visit and his persistent interrogation, each and every character will learn new things about each other. The fact that there is absolutely no love amongst the family is evident right from the beginning with the description of the house, and the Inspector exposes that, not for himself, but to teach all the characters things they did not know. The stage directions also show an aura of smugness and self-satisfaction amongst the Birlings: "celebrating a special occasion and are pleased with themselves." The opening of the play suggests strongly that the Birlings are very happy with life and more importantly, themselves. At present, nothing could be said or done, that would put a dampener on their spirits. Not only the stage directions, but also once the opening scene has begun implies that the family are happy, with many references to such actions as 'laughing' and 'smiling'. Everyone on stage is at, or approaching, their happiest moment throughout the entire play, all until the Inspector arrives. ...read more.

The claustrophobia that would be felt reinforces the Inspector's role of very dominant presence. The Three Unities also increase the Inspector's impact. This is another of the methods used to keep the audience's interest because Priestley would have known at the time that there would be a single, dramatic focus for the audience. Once Act Two has begun, we begin to see just how much of an effect the Inspector has had on Sheila in-particular: "No Mother - please!" With these words, it has come to the attention of everyone both on stage and in the audience, that Sheila has developed sensitivity due to the Inspector's visit. Not only that, but she has more importantly developed as a person. That is why she immediately spots the condescension in her Mother's voice. Later in Act Two, the Inspector's influence is fully realised: "This isn't the time to pretend that Eric isn't used to drink." The fact that Sheila suddenly reveals to her family about her brother's heavy drinking confirms our suspicions that Sheila has been conditioned most by the Inspector's visit. She can feel his power and presence and in the process, we can begin to see the truth beneath the veneer of respectability. There is an unpleasant reality that everyone must face up to and take full responsibility for. The Inspector's presence is possibly most seen in his dealings with Gerald. Someone of his social status could easily refuse to speak to the Inspector, but he feels as if he has to: "(TO GERALD) Go on." It is obvious that the Inspector is more domineering than first thought. It is because of the Inspector that Gerald confesses to being involved with Daisy Renton. Under normal circumstances though, he would never reveal that. He would simply lie and make up another story, as he did at the time to Sheila. All of this portrays just how much of a presence the Inspector really is both on stage and throughout the audience. ...read more.

Many would also argue that we the audience act as the jury. It is our job as individuals to decide whether or not the family - as a whole - are guilty for Eva Smith/Daisy Renton's death. In my opinion, they are fully responsible. They should have borne in mind at the time, that all of their actions will eventually end up harming someone, even if it turned out not to be Eva or Daisy, as the case may be. Another aspect of the Inspector's final speech is the feeling of irony: "millions and millions and millions of Eva Smiths and John Smiths" This short sentence is a direct contradiction of Birling's right at the beginning when he told Eric and Gerald they should only look out for themselves. Hopefully now, the Inspector has made him realise that if everyone was as self-centred and ignorant of other people, then there would be far more cases similar to this. Another of the Inspector's comments would today, go unappreciated: "fire and blood and anguish." The reason for Priestley choosing these specific words was because at the time the play was first performed at the end of World War II, the audience would fully appreciate the pain in these words. They have lived through the war and learnt that people need to look out for one another or death is imminent. All of those words represent the pain, distress and grief endured during World War II. Priestley is once again putting his message across with great effect. With the structure of the play, Priestley has gone against the traditional detective genre and created his own style. In a traditional detective story, it begins with a group of suspects until they are whittled down to just the one, but in, "An Inspector Calls" , it begins with only one suspect in Mr. Birling and ends with five suspects including the whole family. The Inspector does this by exposing all of their guilt and gradually drawing them all into the spotlight. 1 ...read more.