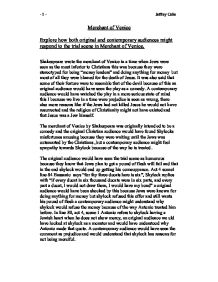 Explore how both original and contemporary audiences might respond to the trial scene in Merchant of Venice. Shakespeare wrote the merchant of Venice in a time when Jews were seen as the most inferior

Merchant of Venice Explore how both original and contemporary audiences might respond to the trial scene in Merchant of Venice. Shakespeare wrote the merchant of Venice in a time when Jews were seen as the most inferior to Christians this was because they were stereotyped for being "money lenders" and doing anything for money but most of all they were blamed for the death of Jesus. It was also said that some of their feature were to resemble that of the devil because of this an original audience would have seen the play as a comedy. A contemporary audience would have watched the play in a more serious state of mind this I because we live in a time were prejudice is seen as wrong, there also more reasons like if the Jews had not killed Jesus he would not have resurrected and the religion of Christianity might not have existed and that Jesus was a Jew himself. ...read more.

In line 80, act 4, scene 1 Antonio refers to shylock having a Jewish heart when he does not show mercy, an original audience would have looked at shylock as a monster and would have understood why Antonio made that quote. A contemporary audience would have seen the comment as prejudice and would understand that shylock has reasons for not being merciful. In line 142, Act 4, Scene 1 Shylock makes a good point "I stand here for law" a contemporary would see this as a good point because Shylock made the contract and Antonio agreed with it, it is also a smart thing to do because he is using the Christian laws against them. An original audience would know that shylock isn't going to get away with it but also saw him as very cunning and devious when he said that quote. There is also another reference to shylock showing no mercy made by the duke in act 4, scene 1, line 8 "incapable of pity, void and empty from any dram of mercy" ...read more.

The original audience will be glad that eventually the Jew lost but the contemporary audience will think that this is wrong because the Christians used illegal methods just to set someone free. In the movie adaptation of the merchant of Venice they have given the play a serious atmosphere to make it seem as if shylock has been victimised. In the trial seen Shylock is continuously interrupted by the Christians when he is trying to make a point this makes the Christians look prejudice because it shows that they are not even bothered to listen to what shylock has say. My conclusion is that original audiences and contemporary audiences will have a difference in opinion because in the year that the play was written insulting a Jew was not seen as wrong or prejudice but a contemporary audience lives in a multicultural society where everyone is respected for their views of religion even if they are not agreed with. ?? ?? ?? ?? - 1 - Jeffrey Celis ...read more.