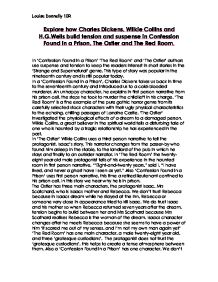 Explore how Charles Dickens, Wilkie Collins and H.G.Wells build tension and suspense in Confession Found in a Prison, The Ostler and The Red Room

Explore how Charles Dickens, Wilkie Collins and H.G.Wells build tension and suspense in Confession Found in a Prison, The Ostler and The Red Room. In 'Confession Found in a Prison' 'The Red Room' and 'The Ostler' authors use suspense and tension to keep the readers interest in short stories in the 'Strange and Supernatural' genre. This type of story was popular in the nineteenth century and is still popular today. In a 'Confession Found in a Prison', Charles Dickens takes us back in time to the seventeenth century and introduced us to a cold-blooded murderer. An unhappy character, he explains in first person narrative from his prison cell, the steps he took to murder the child left in his charge. 'The Red Room' is a fine example of the pure gothic horror genre from its carefully selected stock characters with their ugly physical characteristics to the echoing, chilling passages of Lorraine Castle. 'The Ostler' investigated the physiological effects of a dream to a damaged person. ...read more.

Also a 'Confession Found in a Prison' has one character. We don't know much about him, other than the fact that he held 'a lieutenant's commission in His Majesty's army'. We don't trust this character because he is a cold-blooded murderer. There are other characters in this story like his brother, wife, sister-in-law and the child he murdered. Lorraine Castle is the setting of 'The Red Room' it is an old castle, in which 'the red room in which the young duke had died.' It is also haunted by 'the tale of a timid wife and the tragic end that came to her husband's jest of frightening her'. The 'grotesque custodians' add so much to the tension and creation of a frightening setting. The Ostler is set in the suburbs of a large sea-port town on the west coast of England. The setting is described in detail when Isaac is staying at the inn. 'The bleak autumn wind was still blowing and the solemn, monotonous, surging moan of it in the wood was dreary and awful to hear through the night-silence.' ...read more.

Like 'The Ostler' these sentences are descriptive and happen before the climax of the story. The tension rises and falls when the protagonist is walking up the corridor because he sees something than makes him nervous and then he calms himself down by giving it an explanation. 'Confession Found in a Prison' uses a mixture of compound and complex sentences, when the story is building up to the action. This helps to build tension. The original readers of these type of stories in the nineteenth century, would have enjoyed them for the same reasons today we enjoy watching horror film, but because televisions weren't invented in the nineteenth century they read books instead, some of the those books have been turned into horror films. The stories are popular now and then because they re short, condensed and suspense and tension builds throughout them. I think that the most successful in building tension and suspense was 'The Red Room' by H.G.Wells because the tension rises and falls in the story. I think that 'The Red Room could easily be adapted into a film or television show. Louise Donnelly 10R ...read more.