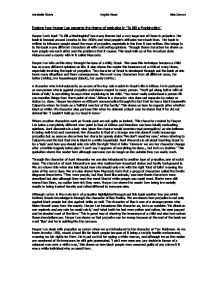 Explore how Harper Lee presents the theme of prejudice in To Kill a Mockingbird.(TM)

Explore how Harper Lee presents the theme of prejudice in 'To Kill a Mockingbird.' Harper Lee's book 'To Kill a Mockingbird' has many themes but a very large one of these is prejudice. Her book is focused around America in the 1930's and what people's attitudes were back then. Her book is written to influence people about the ways of prejudice, especially in the time it was written. She brings in to the book many different characters all with contrasting opinions. Through these characters he shows us how people see each other and the problems that it causes. This book tells us of the American state Alabama and a county with in it called Maycomb. Harper Lee tells us this story through the eyes of a child, Scout. She uses this technique because a child has so many different opinions on life. It also shows the reader the innocence of a child at many times, especially involving the topic of prejudice. ...read more.

Aunt Alexandra is all about teaching Scout to be a 'lady' and how you should only mix with the right 'kind of folks.' However we see her character change after a terrible tragedy takes place 'I can't say I approve of everything he does.., but he's my brother.' This quotation shows the reader how although someone can be tough on the outside they can easily crack. Through the character of Aunt Alexandra we are also introduced to another type of prejudice, one of social class. The character of Aunt Alexandra is one who realizes how important status and family background is. We are shown this when she tells Scout how she should only mix with the right 'kind of folks' meaning the ones of the same class. We are also shown how Maycomb feels that a group of characters called the Ewells disgraces there town. 'They were people, but they lived like animals,' was how these characters were described but also although they were the worst kind of white people you could meet. ...read more.

He is put on trial for raping a white woman, and although we as the reader are convinced of his innocence he still gets prosecuted. 'I ain't ever seen any jury decide in favour of a coloured man over a white man,' this shows us how black people were assumed guilty of any crimes if it was a white individual who accused them. There are many different forms of prejudice which are highlighted in 'To Kill a Mockingbird.' The novel is written from a child's perspective which shows us how children deal with these situations and how there ideas change. The whole novel is based around the fact that you can not judge others by colour, race or status. The quotation used to sum the entire novel up is that you can never have an understanding of other 'Until you climb into his skin and walk around in it.' All of this shows us that Harper Lee's main message is to not judge a man by the colour of his skin or the life that he leads i.e. home and job. ?? ?? ?? ?? Annabelle Storey English Essay Miss Cannon ...read more.

This is a well written essay that explores some key issues; as a GCSE essay the whole piece needs to be developed into a longer response with more events from the text linked and referenced.