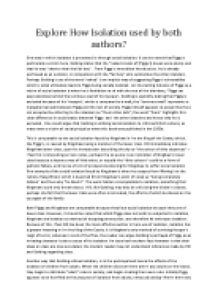 Explore how isolation is used by the authors Hill and Golding in their respective novels?

Transfer-Encoding: chunked ﻿Explore How Isolation used by both authors? One way in which Isolation is presented in through social isolation: it can be noted that Piggy is particularly a victim here. Golding states that the ?naked crooks of [Piggy?s] knees were plump and that he was ?shorter than the fair boy?. From Piggy?s immediate introduction, he is already portrayed as an outsider, in comparison with the ?fair boy? who symbolises the other islanders. Perhaps Golding?s use of the word ?naked? is an implicit way of suggesting Piggy?s vulnerability which is what ultimately leads to Piggy being socially isolated. An interesting instance of Piggy as a victim of social isolation is when he is forbidden to sit with the rest of the islanders; ?Piggy sat expressionless behind the luminous wall of his myopia?- Golding is explicitly stating that Piggy is excluded because of his ?myopia?, which is compared to a wall; the ?luminous wall? represents a metaphorical wall between Piggy and the rest of society. ...read more.

One example of the social isolation faced by Kingshaw is when he escapes from Waring?s to the remote Hang Wood, which is depicted (from Kingshaw?s point of view) as ?being completely hidden? and thus why ?he liked it?. The word hidden is comparable to isolation, something that Kingshaw could only dream about. Hill, like Golding, may also be criticising the divide in classes, perhaps she felt that the lower class were often mis-treated, the effects of which burdened on the youngest of the family. Both Piggy and Kingshaw are comparable because they face social isolation because they are of lower class. However, it should be noted that whilst Piggy does not wish to subjected to isolation, Kingshaw see isolation as method of escaping persecution, and therefore he embraces isolation. Because of this, I feel Hill has been the more effective author in here use of isolation, isolation has a greater meaning in I?m the King of the Castle, it is Kinghaw?s only method of surviving Hooper?s reign of terror, whereas in Lord ...read more.

but because of the isolation faced by the savages, they no longer obey such rules. The verb ?painted? is especially effective here as it describes the manner in which isolation affects the young: slowly over time. Another instance of isolation causing behaviour that our society would not accept is when a dictatorship emerges under Jack: one of the highlights of this being when a savage states ?[Jack] is going to beat Wilfred? ? the casual manner in which the savage speaks depicts the distances that Jack?s ?tribe? have moved from society, there is no emotion in that phrase and this only further suggests the negative impact on children when they are isolated from adults. Perhaps Golding is being cynical of human nature, criticising humans and their lack of empathy which only appears to be existent because of the rules of society. Maybe, Golding see?s the deeper impacts of bad human nature, such as poverty in poorer countries. ...read more.