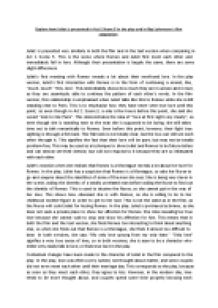 ﻿Explore how Juliet is presented in Act 1 Scene 5 in the play and in Baz Luhrmann?s film adaptation Juliet is presented very similarly in both the film and in the text version when comparing in Act 1 Scene 5. This is the scene where Romeo and Juliet first meet each other and immediately fall in love. Although their presentation is largely the same, there are some slight differences. Juliet?s first meeting with Romeo reveals a lot about their newfound love. In the play version, Juliet?s first interaction with Romeo is in the form of continuing a sonnet, like, ?much?touch? ?this?kiss?. This immediately shows how much they are in unison and in love, as they are seamlessly able to continue the pattern of each other?s words. In the film version, this relationship is emphasised when Juliet talks like this to Romeo while she is still standing next to Paris. ...read more.

Juliet?s reaction when she realises that Romeo is a Montague reveals a lot about her love for Romeo. In the play, Juliet has a suspicion that Romeo is a Montague, so asks her Nurse to go and enquire about the identities of some of the men she sees. She is being very clever in the scene, asking the identity of a totally unrelated man before asking the Nurse to find out the identity of Romeo. This is used to deceive the Nurse, so she cannot get in the way of her love. This shows how obsessed she is with Romeo, as she is willing to lie to her childhood mother-figure in order to get to her love. This is not the same as in the film, as the Nurse will scold Juliet for kissing Romeo. ...read more.

In the play, love was often a very rushed, not thought about matter, and some couples did not even meet each other until their marriage day. This corresponds to the play, because as soon as they meet each other, they agree to kiss. However, in the modern day, love tends to be more thought about, and couples spend some time properly knowing each other before they marry. This corresponds to the film, as Romeo and Juliet meet one another through a fish tank before asking to kiss. This represents the considered approach to love today, so can be described as accurate to today?s world. Overall, Juliet is portrayed as a very similar character in both the film version and the play version, and there are only slight differences, like making her love public and also not deceiving her Nurse. To conclude, the play and the film are very similar in their views of Juliet, but the film, being visual, provides us with more clues about her true character. ...read more.