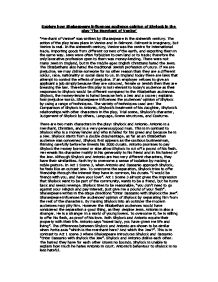 Explore how Shakespeare influences audience opinion of Shylock in the play 'The Merchant of Venice' "Merchant of Venice" was written by Shakespeare in the sixteenth century. The action of the play takes place in Venice and in Belmont. Belmont is imaginary, but Venice is real. In the sixteenth century, Venice was the centre for international trade, importing goods from different corners of the earth, and exporting them in the same way. Jews were often forbidden to own land or to trade; therefore the only lacerative profession open to them was money-lending. There were not many Jews in England, but in the middle ages English Christians hated the Jews. The Elizabethans also hated the traditional Jewish profession of usury. If we are prejudice, we may dislike someone for no other reason than they are a different colour, race, nationality or social class to us. In England today there are laws that attempt to control the effects of prejudice. If an employer refuses to give an applicant a job simply because they are coloured, female or Jewish then they are breaking the law. Therefore this play is not relevant to today's audience as their responses to Shylock would be different compared to the Elizabethan audiences. Shylock, the money-lender is hated because he's a Jew and a usurer; explains how prejudice works. Shakespeare influences the audiences' opinion of Shylock by using a range of techniques. ...read more.

Antonio is the opposite, he is very generous. He is more trusting than Shylock. He would rather risk his life for a loved one when Shylock seeks to take the life of his enemy. Shakespeare makes the audience feel sorry for Shylock when he shows the comparison between Antonio and Shylock. This makes the Elizabethan audience see Shylock in a different way; he isn't seen as a Jewish outcast. However Shakespeare makes the audience think Shylock is a harsh, selfish and evil person. In Act 3 scene 1 Shakespeare reveals Shylock's human priorities at their very worst. Shylock says "O my daughter! O my ducats! O my daughter! Fled with a Christian! O my Christian ducats!" Shakespeare implies Shylock is more concerned, worried and upset about his ducats. Shylock's interest in his money revealed to be greater than the concern for his daughter. Shylock repeatedly talks about his loyalty to Jewish faith but, this is shown to be a lot weaker than his concern for his lost money, "A diamond gone, cost me 2000 ducats in Frankfort! The curse never fell upon our nation until now." Under pressure of his losses Shylock reveals himself as a contemptible miser, with no human emotions for his daughter. The abduction of Jessica makes the modern audiences emphasise with Shylock, this all changes when Shylock seems to be more upset about his loss of ducats then the loss of his daughter. In the trial scene Shakespeare continues to show Shylock as an outsider. ...read more.

Shakespeare confuses the audience's opinion of Shylock. The language used in Act 1 scene 3 shows more power compared to the language at the end of Act 4 scene 1, where the language shows defeat. Shakespeare uses language to show shylock's close attachment to his money and the lack of concern for his daughter. Shakespeare makes an obvious division between Shylock and the Christians. Shylock has tried to overcome it, in more ways than one. He makes an impulsive gesture of generosity. "I would be friends with you", shows a perhaps more humane Shylock, the man who gave his voice to the brotherhood of men in his "If you cut us, do we not bleed?" speech. Shylock is portrayed as an outcast who longs for social acceptance. At the end of the play Shylock has been defeated of his bond, robbed of is ducats, and deserted by his daughter; he is even compelled to give up his birthright, his Jewish religion, and become one of the Christians who he hates so much. Shylock is more complex than any of the other characters in the play: we can think of him as a real person, whose words and deeds are motivated by thoughts and feelings that we can discover from the play, and that we can understand when we have discovered them. Shakespeare influences the audiences' opinion of Shylock using a range of techniques; through language, through Shylock's relationships between other characters and through the way Shylock represents himself. ...read more.