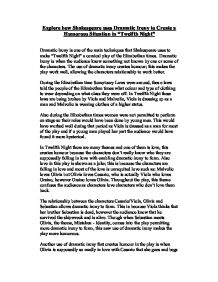 Explore how Shakespeare uses Dramatic Irony to Create a Humorous Situation in "Twelfth Night" Dramatic Irony is one of the main techniques that Shakespeare uses to make "Twelfth Night" a comical play of the Elizabethan times. Dramatic Irony is when the audience know something not known by one or some of the characters. The use of dramatic irony creates humour; this makes the play work well, allowing the characters relationship to work better. During the Elizabethan time Sumptuary Laws were around, these laws told the people of the Elizabethan times what colour and type of clothing to wear depending on what class they were off. In Twelfth Night these laws are being broken by Viola and Malvolio, Viola is dressing up as a man and Malvolio is wearing clothes of a higher status. Also during the Elizabethan times women were not permitted to perform on stage so their roles would have been done by young men. This would have worked well during that period as Viola is dressed as a man for most of the play and if a young man played her part the audience would have found it more hysterical. ...read more.

Viola realises that her brother might be alive, "He names Sebastian; I my brother know...." The character Orsino and Cesario create humour for the audience: this is because during the Elizabethan times the audience would have watched the play as a man loving a man. The scenes that the two characters are in are extremely humorous because the audience know a lot more than the characters, making it even more comical. Furthermore, the characters relationship creates tension, as the audience want to know if there is a future between them. The playwright uses this tension to make the play more interesting and makes you want to find out what is happening. In Twelfth Night there are many sub-plots which all meet up with the main-plot an example of this is Malvolio and the trick letter from Olivia. This can be linked to dramatic irony because the audience will know that the letter is a fake and that it is from Maria, Sir Toby, Sir Andrew and Fabian who are all taking revenge on Malvolio for placing himself in a higher status than Sir Toby and threatening Maria. ...read more.

So Orsino goes of with Viola, Sebastian goes of with Olivia and Maria goes of with Sir Toby. However the only character out of them whose love seems to be the truest is Viola's. This is because Viola stuck to loving Orsino all throughout the play, but Orsino goes from Olivia to Viola and Olivia goes from Cesario to Sebastian. The unhappy character at the end of the play is Malvolio for the reason that he realises that people had been playing a trick on him and his last line before he leaves the stage is, "I'll be revenged on the whole pack of you!" This shows that even though everyone will be happy he will come back to ruin it and get them back for what they did to him. Humour also comes across through the characters awareness or unawareness of the characters such as Viola not knowing that her brother is alive and visa versa. Overall, Shakespeare has used the themes of Mistaken Identity, Love, Madness and Mayhem to create a comical play, with the aid of dramatic irony. By creating so much humour in the play it makes the audience feel the tension in the play and more involved in the play. ?? ?? ?? ?? ...read more.