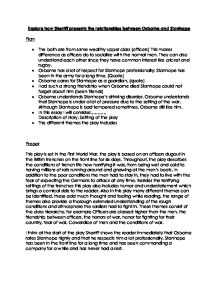 Explore how sherriff presents the relationships between Osborne and Stanhope

Explore how Sherriff presents the relationships between Osborne and Stanhope Plan * The both are from same wealthy upper class (officers) This makes difference as officers do to socialize with the normal men. They can also understand each other since they have common interest like cricket and rugby. * Osborne has a lot of respect for Stanhope professionally; Stanhope has been in the army for a long time. (Quote) * Osborne cares for Stanhope as a guardian, (quote) * Had such a strong friendship when Osborne died Stanhope could not forget about him (been friends) * Osborne understands Stanhope's drinking disorder, Osborne understands that Stanhope is under a lot of pressure due to the setting of the war. Although Stanhope is bad tempered sometimes, Osborne still like him. * In this essay I will consider........... Description of story, Setting of the play * The different themes the play includes Proper This play is set in the First World War, the play is based on an officers dugout in the British trenches on the front line for six days. Throughout, the play describes the conditions of trench life how horrifying it was, from being wet and cold to having millions of rats running around and gnawing at the men's boots. In addition to the poor conditions the men had to stay in, they had to live with the fear of expecting the Germans to attack at any time. Besides the terrifying settings of the trenches this play also includes humor and understatement which brings a comical side to the reader. Also in this play many different themes can be identified, these add much thought and feeling while reading, the range of themes also provide a thorough extended understanding of the rough conditions and atmosphere the soldiers had to fight in. These themes consist of the class hierarchy, for example Officers are classed higher than the men, the friendship between officers, the horrors of war, honor for fighting for their country, fear of war, Cowardice of men and the conditions of war. ...read more.

I think at the start of the play Sherriff shows the reader immediately that Osborne rates Stanhope highly and that he respects him a lot professionally. Stanhope has been in the front line for a long time and has been commanding a company for a while and has never had a rest. 'He came out straight from school when he was eighteen. He's commanded this company for a year in and out of the front line.' The play also shows that Osborne would do anything he could to help or protect Stanhope, this proves a strong friendship between them. 'I love that fellow. I'd go to hell with him.' Stanhope has a drinking disorder, Osborne recognizes this, however he understands that it is mainly through pressure, stress and the reality of war. When Stanhope says, 'There were only two ways of breaking the strain, one was pretending I was ill - and going home; the other was this,' Osborne sympathizes deeply and encourages him that, 'When the war is over - and the strains, gone - you'll soon be as fit as ever.' This is comforting for Stanhope and is what you would expect a friend to say. Throughout the play Osborne acts as a fatherly figure towards Stanhope. At the beginning of the play Osborne explains that, 'You'll find the other officers call me uncle' Stanhope values this and is often quoted calling him uncle. Such as, 'You've felt that, Uncle, haven't you?' The reality is of war forces Stanhope into feeling desperate for someone to look up-to and to rely on. 'That'll be fine. Now then, come along, old chap. I'll see you get called at two o'clock' This shows how close the relationship between Osborne and Stanhope is. When Osborne is killed by, 'A hand grenade - while he waiting for Raleigh' Stanhope appears withdrawn and makes sarcastic comments about the brigadier 'How awfully nice - if the brigadier's pleased' And when Raleigh takes a seat on Osborne's bed Stanhope questions, 'Must you sit on Osborne's bed?' ...read more.

This shows undying respect for Osborne from Stanhope even when Osborne is no longer with him. Later on when Stanhope and Raleigh are arguing, Raleigh questions, 'How can I sit down and eat that - when - when Osborne's - lying - out there.' Stanhope viciously replies, 'The one man I could trust - my only friend - the one man I could talk to as man to man - who understood everything - and you think that I don't care?' This shows how deeply Stanhope is grieving as never before he has raised his voice to another officer. This also shows why he was drinking and joking to the other officers earlier because he was trying to forget. 'To forget, you little fool- to forget!' Stanhope and Osborne get on especially well because they are of the same social class, both officers came from the wealthy upper class. Having being brought up with the experience of playing rugby and cricket they are able to understand each other possessing the same common interests. 'He was the skipper of rugger at Barford, and kept wicket for the eleven.' The fact that both Stanhope and Osborne are the same class is an important factor in the relationship as officers do not socialize with the normal ranked men. 'My officers are here to be respected - not laughed at.' My opinion of Stanhope and Osborne's relationship is that they were very close to each other throughout the play. Osborne kept Stanhope calm when he was stressed and providing support when needed exactly what a friend would do. When Osborne passed away Stanhope grieved for him and showed emotion devout to his best friend. I felt deeply sympathetic to Stanhope when this happed as I could not have imagined this happening to me. I felt the play was good, it showed contrasts of war and provided a clear picture for the reality for war environment. ...read more.

A well-structured response which uses many very good examples to support its points. The response is extremely focused and clear in expression. The points made are supported with appropriate examples throughout, including appropriate quotations.

Some of the points could have been developed further and other themes and aspects of their relationship explored.

There is a need to proof-read in order to amend errors in spelling, punctuation and grammar and to improve the quality of communication.