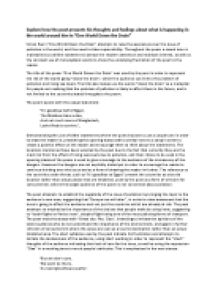 ﻿Explore how the poet presents his thoughts and feelings about what is happening in the world around him in ?One World Down the Drain? Simon Rae?s ?One World Down the Drain? attempts to raise the awareness over the issue of pollution in the world, and the need to take responsibility. Throughout the poem a casual tone is maintained as a blithe statement to attract the reader?s attention and maintain interest, as well as the constant use of monosyllabic words to show the underlying frustration of the poet to the reader. The title of the poem ?One World Drown the Drain? was used by the poet in order to represent the risk of the world going ?down the drain?, which the audience can link to the problem of pollution and rising sea levels. The title also makes use the words ?down the drain? as a metaphor for people not realising that the problem of pollution is likely to affect them in the future, and is not limited to the countries stated throughout the poem. ...read more.

The poet ends the stanza with ?Great city. Pity. Ciao?, intending to imitate the opinions of the wider audience who do not understand the importance of the environment, and again in further criticism of consumerism where the areas are seen as a tourist destination rather than an actual inhabited area. The short syllables used by the poet indicate his frustration and attempts to imitate the carelessness of the audience, using short wording in order to represent the ?short? thoughts of the audience indicating their lack of care for the issue, as well as using the expression ?Ciao? in a mocking tone to mock people?s attitudes. This is emphasised in the next stanza: ?But we don?t care, We wont be there, Our acid greenhouse party?, which states the intended description to the audience, and suggests that the reasoning behind the ignorance is that ?We won?t be there?, and that the audience will not be able to feel the results of their own actions. The poet presents his opinion that the world is being damaged by the people who do not consider the consequences of their actions, using a ...read more.

that the lack of action taken by the government is due to their interest in trade, and that this has a higher priority than making a change for the future. The poem ends with ?(The future has no vote)?, in order to show the audience that the present actions will affect the future and that it is important to begin taking action now. The poet also chooses to use brackets with this in order to show how the poet believes that this thought has been pushed aside, and left till the end despite the fact that it is important to realise this issue. ?One World Down the Drain? attempts to raise awareness over the issue of pollution and encourages the audience to think about their actions and to take responsibility, due to the fact that the actions of the present will affect the future. The poet also uses ridiculing tones and irony as a form of criticism at the government to suggest the government?s lack of care over the issue of the environment and how the issue is becoming more of an afterthought rather than a priority. ...read more.