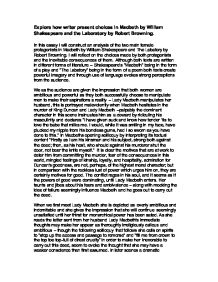 Explore how the writers present choices in Macbeth by William Shakespeare and the Laboratory by Robert Browning.

Explore how writer present choices in Macbeth by William Shakespeare and the Laboratory by Robert Browning. In this essay I will construct an analysis of the two main female protagonists in Macbeth by William Shakespeare and The Labatory by Robert Browning. I will reflect on the choices made by both protagonists and the inevitable consequences of them. Although both texts are written in different forms of literature - Shakespeare's "Macbeth" being in the form of a play and "The Labatory" being in the form of a poem both texts create powerful imagery and through use of language evokes strong perceptions from the audience. We as the audience are given the impression that both women are ambitious and powerful as they both successfully choose to manipulate men to make their aspirations a reality - Lady Macbeth manipulates her husband, this is portrayed malevolently when Macbeth hesitates in the murder of King Duncan and Lady Macbeth -palpably the dominant character in this scene insinuates him as a coward by ridiculing his masculinity and declares "I have given suck and know how tender 'tis to love the babe that milks me. ...read more.

though the following soliloquy that follows she calls on spirits to "stop up the access and passage to remorse" and "fill me from crown to the top toe top-full of direst cruelty" in order to make her inexorable to carry out this deed, seem to evoke the thought that she may have a weaker conscience than first assumed. In later scenes a dramatic metamorphosis of the character of Lady Macbeth confirm this as her guilt and penitence and shows that her conscience cannot bear the burden of such remorse as her mental wellbeing deteriorates rapidly. This deeply contrasts with the Lady in the Labatory as, although it is undetermined what her reaction was once the death had been carried out seems to take great gratification of the thought of her victim suffering an excruciating death - I can only assume her reaction after the deed was carried out - but the poem showed no traces of the Laboratory lady's conscience being suppressed at the thought of carrying out this deed. ...read more.

- The structure of this poem is of contrast deeply to the content - the metre is anapaestic, which creates a rather sprightly effect - a juxtaposition of the intensity of the negative emotions depicted in the poem. Overall the writers William Shakespeare and Robert Browning evidently portrayed women in a rather misogynistic manner - Shakespeare chose to depict Lady Macbeth as a women who chose the easiest way to gain monarchial power and this evidently became her downfall as her conscience became a lot more susceptible to guilt than we first assumed - the last scene of her is of profound contrast to the first. Robert Browning illustrates The Lady in the Laboratory as an acrimonious woman who contains a deep bitterness stemming from her mistreatment, and who is disappointed in love and vows to seek vengeance though murder. Their choices are what have been considered witchlike in their time and overall both women break the convention of what is expected in their time, where they were oppressed and marginalized in society. ?? ?? ?? ?? ...read more.

A highly confident and well articulated essay which remains focused on the question. Evidence is used for Macbeth but only a little for Browning. Structure is also looked at.