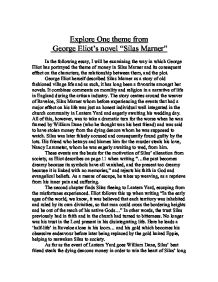 Explore One theme from George Eliot's novel "Silas Marner" In the following essay, I will be examining the way in which George Eliot has portrayed the theme of money in Silas Marner and its consequent effect on the characters, the relationship between them, and the plot. George Eliot herself described Silas Marner as a story of old fashioned village life and as such, it has long been a favourite amongst her novels. It combines comments on morality and religion in a narrative of life in England during the artisan industry. The story centres around the weaver of Raveloe, Silas Marner whom before experiencing the events that had a major effect on his life was just an honest individual well integrated in the church community in Lantern Yard and eagerly awaiting his wedding day. All of this, however, was to take a dramatic turn for the worse when he was framed by William Dane (who he thought was his best friend) and was said to have stolen money from the dying deacon whom he was supposed to watch. Silas was later falsely accused and consequently found guilty by the lots. His friend who betrays and blames him for the murder steals his love, Nancy Lammeter, whom he was eagerly awaiting to wed, from him. These events are the basis for the motivation of Silas' alienation from society, as Eliot describes on page 11 when writing "...the past becomes dreamy because its symbols have all vanished, and the present too dreamy because it is linked with no memories," and rejects his faith in God and evangelical beliefs. ...read more.

Eliot also makes the point known that great enthusiasm for money can lead to sin and dispute within a family, contrasted through the stealing of Silas' money by Dunstan and the separation and drawing together of two brothers (Dunstan and Godfrey). In Chapter 12, we are told more about the relationship between Godfrey and Molly Farren, whom he has married without consulting his father, who in contradiction believes that Dunstan should marry a more sober Nancy Lammeter. Godfrey himself tells his wife that he would "sooner die than acknowledge her as his wife." This consequently leads to her own premeditated act of vengeance on New Year's day which would have seen her confront Godfrey and his family about their secret marriage should it not have ended in disaster. Again, the idea of money as an ultimate evil is made evident here as Molly's innocence leads to her unlikely death, when she falls into a pit of snow. The incident contrasts the death of 'Wildfire' as both the horse and Molly Farren were the innocent parties in the plot's outcome. I will now turn my attentions back to Silas. We learn from Chapter 5 that Silas' decision to leave his home unattended and unlocked was simply a routine errand, briefly leaving the cabin. He did not lock the door because after fifteen years of this pattern of living, any alteration, such as a robbery, seemed almost incomprehensible. In the same chapter, we become familiar with the irony of it all given that the incident of the theft occurred only after 15 years of Silas living in Raveloe. ...read more.

The fact that Lantern Yard has disappeared years later when Silas and Eppie go to visit it suggests that the town no longer dear to Silas. In fact, the removal of the town serves as a metaphor for Silas's ability to find happiness outside the past. This makes sense because since the weaver has recovered and Eppie has opened his eyes to the reality of the world again, his soul is no longer separate from his body. On the other side, we have the Cass family, a wealthy upper class group showing that money can buy you no happiness, as the selfish scoundrels of Dunstan and Godfrey do not get their own way. As a wealthy Godfrey (Eppie's natural father), a victim of circumstance who disclaimed the child tries to claim her back at the age of 18 she refuses. Eliot strongly emphasises the point here that nurture wins over nature and that Godfrey, with all his money, cannot buy the one thing that would bring him and Nancy happiness, a child to love. For Silas, Eppie is seen as the fulfilment of natural justice. Silas says, "God gave her to me because you turned your back on her, and he looks upon her as mine you've no right to her! When a man turns a blessing from his door, it falls to them as take it in", acknowledging that Silas should be the father rather than Godfrey. We learn that money is one of the central themes of the book with Eliot leaving many morals to comprehend concerning it's 'weaving' together of the lives of various characters and being one of the main factors of the novel and in truth everyday life to this day. ...read more.