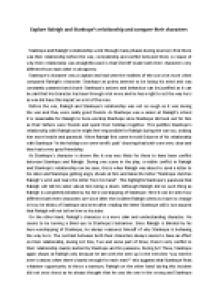 Explore Raleigh and Stanhopes relationship and compare their characters

﻿Explore Raleigh and Stanhope?s relationship and compare their characters Stanhope and Raleigh?s relationship went through many phases during Journey?s End there was their relationship before the war, comradeship and conflict between them. A reason of why their relationship was straightforward is that Sherriff made both their characters very different from each other in all aspects. Stanhope?s character was a captain and had seen the realities of the war a lot more when compared Raleigh?s character. Stanhope at points seemed to be losing his mind and was constantly paranoid and drunk. Stanhope?s actions and behaviour can be justified as it can be said that his character has been through a lot more and he has a right to act the way he is as war did have this impact on a lot of the men. Before the war, Raleigh and Stanhope?s relationship was not as rough as it was during the war and they were really good friends. ...read more.

This highlights Stanhope?s paranoia that Raleigh will tell his sister about him being a drunk. Although Raleigh did no such thing as Raleigh is completely blinded by his hero-worshipping of Stanhope. Here it can be seen how different both their characters are since after the incident Raleigh seems to have no change in how he thinks of Stanhope and even after reading the letter Stanhope still is not assured that Raleigh will not tell on him to his sister. On the other hand, Raleigh?s character is a more calm and understanding character. He seems to be turning a blind eye to Stanhope?s behaviour. Since Raleigh is blinded by his hero-worshipping of Stanhope, he always reassures himself of why Stanhope is behaving the way he is. The contrast between both their characters always seems to have an effect on their relationship, during Act One, Two and some part of three, there?s only conflict in their relationship mainly started by Stanhope and his paranoia. ...read more.