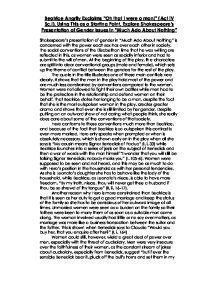 Beatrice Angrily Exclaims "Oh that I were a man!" (Act IV Sc.I). Using This as a Starting Point, Explore Shakespeare's Presentation of Gender Issues in "Much Ado About Nothing" Shakespeare's presentation of gender in "Much Ado About Nothing" is concerned with the power each sex has over each other in society. The social conventions of the Elizabethan time that he was writing are reflected in this, as women were seen as socially inferior and had to submit to the will of men. At the beginning of the play, the characters are split into clear conventional groups (male and female), which sets up the theme of conflict between the genders for the rest of the play. The quote in the title illustrates one of these main conflicts very clearly. It shows that the men in the play hold most of the power and are much less constrained by conventions compared to the women. Women were not allowed to fight their own battles while men had to be the protectors in the relationship and defend women on their behalf. That Beatrice states her longing to be a man, despite the fact that she is the most outspoken woman in the play, creates greater drama and shows that even she is still limited by her gender. Despite putting on an outward show of not caring what people think, she really does care about some of the conventions of that society. Hero conforms to these conventions much more than Beatrice, and because of the fact that Beatrice is so outspoken this contrast is even more marked. ...read more.

One of the main features mentioned is paleness of skin, which, in Shakespeare's time, showed a woman to be of the upper classes because they did not have to work outside under the sun all day. Surprisingly it is Beatrice that first reveals this, as in Act 2 Scene 1 she says, "Thus goes everyone into the world but I, and I am sunburnt". This shows that it was very important for a woman to have light skin or she would have no hope of attracting a husband. Benedick also outlines the qualities of what he sees as the perfect woman: "Rich, wise, virtuous, fair, mild, noble, of good discourse, an excellent musician and her hair shall be of whatever colour it please God" (II, iii, L.27-34). It is clear that this meets the conventional prescriptions for a suitably accomplished and submissive wife, although Benedick seems to think it would be impossible to ever find this perfect woman, ending his soliloquy with a scornful "Ha!" Conversely, we know little about what women find attractive in men, apart from when Beatrice says, "He that hath a beard is more than a youth, and he that have no beard is less than a man; and he that is more than a youth is not for me, and he less than a man, I am not for him" (II, i, L.30-4). This reinforces the fact that men had more choice over who they married compared to women because the conventional upper class lady would not have expected to marry for love. ...read more.

This is shown when Don Pedro says "I stand dishonour'd, that have gone about to link my dear friend to a common stale" (IV, i, L.63-4) and when Leonato bemoans "O she is fallen into a pit of ink, that the wide sea hath drops too few to wash her clean again" (IV, i, L.138-40). In conclusion, the overall presentation of gender in "Much Ado About Nothing" is that women were socially inferior to men and had stricter set of social rules to adhere to. It is possible to conclude that Shakespeare felt this was the right way of doing things because he does not challenge it and in the end even Beatrice appears to be tamed because after Benedick says "Peace, I will stop your mouth" (V, vi, 97) she does not speak again. Elizabethan conventions are restored because in the end everyone is married to who they should be so Shakespeare sees marriage as the key to happiness and stability. The dance at the end of the play indicates that social conventions have been restored as the ordered rhythm and open identities of the characters provides a sharp contrast to the masked confusion of the dance earlier in the play and women are put back in their place below men in the hierarchy. Even though Beatrice previously wished that she "were a man", she now seems to have accepted that her place in society is below them, though how long this will last is unclear. ?? ?? ?? ?? ...read more.