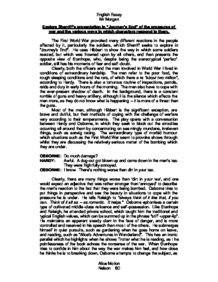 Explore Sherriff's presentation in "Journey's End" of the pressures of war and the various ways in which characters respond to them. The First World War provoked many different reactions in the people affected by it, particularly the soldiers, which Sherriff seeks to explore in "Journey's End". He uses Hibbert to show the way in which some soldiers reacted, but which was frowned upon by all others, and then presents the opposite view of Stanhope, who, despite being the stereotypical 'perfect' soldier, still has his moments of fear and self-doubt. Clearly, both the officers and the men involved in World War I lived in conditions of extraordinary hardship. The men refer to the poor food, the rough sleeping conditions and the rats, of which there are "about two million", according to Hardy. There is also a torturous routine of inspections, patrols, raids and duty in early hours of the morning. The men also have to cope with the ever-present shadow of death. In the background, there is a constant rumble of guns and heavy artillery, although it is the silence which affects the men more, as they do not know what is happening - it is more of a threat than the guns. Most of the men, although Hibbert is the significant exception, are brave and dutiful, but their methods of coping with the challenge of warfare vary according to their temperaments. ...read more.

He realises the extent of his dependence on alcohol, and dislikes this reliance, which he, understandably, sees as a weakness. He seems to discharge his mounting fear and distress partly through a combination of calculated hardness and anger. He also works hard to block out all that is happening around him, taking his job far more seriously than, for example, Hardy, and not allowing himself to rest and therefore have time to contemplate what is happening to him. TROTTER: Cheer up Skipper. You do look glum! STANHOPE: I'm tired. OSBORNE: I should turn in and get some sleep after supper. STANHOPE: I've got hours of work before I sleep. OSBORNE: I'll do the duty roll and see the sergeant major and all that. STANHOPE: That's all right, Uncle. I'll see to it. He feels that he is beginning to lose his grip on reality, and asks Osborne 'D'you ever get the feeling that everything's going farther and farther away...?' He is troubled by the possibility that he might be losing his mind. One way in which his inner struggle expresses itself is through his increasing emotional dependence on Osborne, which Osborne quietly reciprocates. He is very worried, even to the point of paranoia, that Raleigh will write to his sister and tell her about his drink problem. ...read more.

Although fear was accepted by the soldiers as inevitable, actual cowardice was treated with disgust, and cowards were often regarded in some ways as 'degenerate', morally and physically unfit for manly existence. Hibbert is a 'funky man', and has some of the other characteristics of a degenerate. He is devious and deceitful, lacks sensitivity towards others, and is pre-occupied with the kind of sex associated with 'saucy pictures' and Soho. Stanhope refers scathingly to his 'repulsive little mind', and says that he makes him sick. He calls him a 'worm', and even the usually sympathetic Osborne agrees that 'It's a slimy thing to go home of you're not really ill, isn't it.' Sherriff's portrayal of Hibbert is psychologically accurate, and also sympathetic insofar as he allows Hibbert some dignity in his defiance of Stanhope and in his agreeing to Stanhope's insistence that he must try to 'stick it out'. A thoughtful response from the audience is also provoked by Trotter's sympathy with him. However, the prevailing view is that Hibbert is a weak and repellent man, whose reaction to the pressures of war is symptomatic of a lack of moral fibre and wholly unacceptable. There was simply no room in the battlefield for that kind of mental collapse in the face of one's duty. Sherriff presents many different ways in which men reacted to the pressures of the First World War, all of which are representative of the reactions of some men. English Essay Mr Morgan Alice Motion Nelson 6C ...read more.