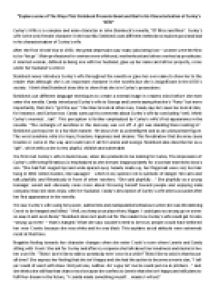 ﻿?Explore some of The Ways That Steinbeck Presents Good and Bad in his Characterisation of Curley?s Wife? Curley?s Wife is a complex and main character in John Steinbeck?s novella, ?Of Mice and Men?. Curley?s wife is the only female character in the novella. Steinbeck uses different methods to explore good and bad in his characterisation of Curley?s wife. After the First World War in 1930, the great depression saw many jobs being lost ? women were the first to be ?let go?. Main professions for women were wifehood, motherhood and others worked as prostitutes. A married woman, defined as being one with her husband, gave up her name and all her property, come under her husband?s control. Steinbeck never introduce Curley?s wife throughout the novella or gave her own name to show her to the reader that although she is an important character in the novella but she is insignificant in the 1930?s society. I think that Steinbeck does this to show that she is in Curley?s possessions. Steinbeck use different language techniques to create a mental image in readers mind before she even enter the novella. ...read more.

?She had full rouged lips and wide-spaced eyes, heavily made up, her fingernail were red, her hair hung in little rolled clusters, like sausages? which in my opinion red is symbolic of danger. She acts and talk playfully and flirtatiously in front of other ranchers. ?She said playfully?? She playfully as a young teenager would and obviously cares more about throwing herself toward people and enjoying male company than she does enjoy with her husband. Candy?s description of Curley?s wife seems accurate after her first appearance in the novella. We saw Curley?s wife using her power, authorities and manipulative behaviours when she was threatening Crook to be hanged and killed. ?Well, you keep your place then, Nigger. I could get you strung up on a tree so easy it aint even funny? Steinbeck does not spell out for the reader how Curley?s wife could get Crooks ?strung up trees? ? that is hanged. What she says wouldn?t need to be true; people would have believed her over Crooks because she was white and he was black. ...read more.

?She was very pretty and simple, and her face was sweet and young? again this remind us that how young she was and how she has so much un happiness in such a short time. ?now her rouged cheeks and her redden lips made her seems alive? remind you of the importance of the make up to her as even her death she looks the same. ?The curls, tiny little sausages? make her seems so young, which make us feel so sorry for her and guilty in a way for thinking she was a floozy, tart in the beginning. In conclusion, sometimes the reader feels sympathetic and unsympathetic about her. The reader?s perception of Curley?s wife character changes without the character actually changing herself. She is young and probably never meant to appear as ?a tramp? or ?a tart?. She simply has nothing to do and nobody to talk to. She knows her husband doesn?t love her and he has no respect for her. ?Think I don?t know where that all went? Even Curley. I know where they all went.? Just his absence alone gives us the impression that their marriage lacks of love and intimacy. Her husband chooses other women over her. Which surely makes feel unworthy and insecure. ...read more.