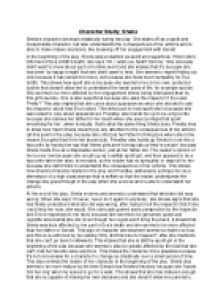 ﻿Character Study: Sheila Sheila's character develops drastically during the play. She starts off as a spoilt and irresponsible character, but later understands the consequences of her actions and is able to make mature decisions, like breaking off her engagement with Gerald. In the beginning of the play, Sheila was presented as spoilt and superficial. When she's informed of Eva Smith's death, she says 'Oh, I wish you hadn't told me.' She obviously didn't want to know about such a horrible event and she implies that it's because she has been 'so happy tonight' that she didn't want to hear. She seems to regret finding out only because it has ruined her mood, not because she feels much sympathy for Eva Smith. This shows how spoilt she is because she seems to live in her own, protected bubble that doesn't allow her to understand the harsh parts of life, for example suicide. She seems to be more affected by her engagement dinner being interrupted than by this girl's suicide. ...read more.

At the end of the play, Sheila evolves and seems to understand that what she did was wrong. When she says 'I'll never, never do it again to anybody', she shows signs that she has finally understood what she did was wrong, after trying to tell the Inspector that if she could help her now, she would. She obviously gained some perspective by the Inspector and Eric's responses to her story because she seems to be genuinely upset and regretful about what she did. Even though her regret won't bring Eva back, it shows that Sheila was truly affected by her part in Eva's death and she seems to be more affected than her father or Gerald. This sign of character development seems too fast to be true, and this is re-enforced by her asking 'Why did this have to happen?' after she mentions that she can't go back to Milwards. This implies that she is still the spoilt girl in the beginning of the play because she seems to also be greatly affected by the fact that she can't visit her favorite store anymore. ...read more.

The reader's opinion of her gets better and they respect her more because she seems to have broken out of the 'spoilt rich girl' attitude and to mature to the degree that she understands the consequences to her actions, so the reader feels more sympathy for her when Gerald leaves. In conclusion, Sheila's character has evolved greatly from the beginning of the play until the end because she starts of as an ignorant, naïve girl who lives in a bubble, and then she ends as a mature, responsible woman who takes responsibility for her actions. The reader at first seems to dislike Sheila because she seems to be a whiny, superficial brat who only cares about herself. The reader's opinion changes as the truth begins to unfold and they feel sympathy for her because Gerald had an affair, but they also gain respect for her because she was mature and responsible enough to tell him the truth and take her own actions, instead of just forgiving him like her parents easily did. ...read more.