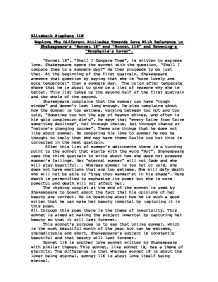 Elizabeth Stephens 11N Explore The Different Attitudes Towards Love With Reference to Shakespeare's "Sonnet 18" and "Sonnet 116" and Browning's "Porphyria's Lover". "Sonnet 18", "Shall I Compare Thee", Is written to express love. Shakespeare opens the sonnet with the question, "Shall I compare thee to a summers day?" He then proceeds to do just that. At the beginning of the first quatrain, Shakespeare answers that question by saying that she is "more lovely and more temperate:" than a summers day. The colon after temperate shows that he is about to give us a list of reasons why she is better. This list takes up the second half of the first quatrain and the whole of the second. Shakespeare complains that the summer can have "rough windes" and doesn't last long enough. He also complains about how the summer is too extreme, varying between too hot and too cold, "Sometime too hot the eye of heaven shines, and often is his gold complexion dim'd". He says that "every faire from faire some-time declines", not through choice, but through chance or "nature's changing course". These are things that he does not like about summer. By comparing his love to summer he may be thought to imply that she may have these faults too but this is corrected in the next quatrain. After this list of summer's detriments there is a turning point to the sonnet that starts with the word "But". Shakespeare uses the third quatrain to write about how she does not possess summer's failings. ...read more.

Shakespeare says that if he is wrong then "I never writ, nor no man ever loved" it is clear that he has written, as he has written this poem and of course men have loved, in his logic this proves that all he has said about true love is true. In both sonnets Shakespeare defines what love is by saying what is not. In "sonnet 18" he told us that his love was not like a summer's day and in "sonnet 116" where he said that true love was not false love which alters easily. Other similarities between the sonnets are that he uses the theme of nature to express his opinions of love. In "sonnet 18" Shakespeare talks about the "rough winds" and "the eye of heaven". In sonnet 116 nature is used to tell us that love is eternal. Love is compared to the North Star, which is "an ever fixed marke". Personification is used in both sonnets. In "sonnet 18" death is personified, In "sonnet 116" nature and time are personified, this makes them seem more powerful. Shakespeare would want to make his comparisons as powerful as possible. Nature is an extremely powerful natural force and by personifying it for his comparisons, he can show just how strong love is. Also, in both sonnets Shakespeare uses the couplet at the end to boast about how his opinions are correct and about his standard of writing. Nature, the eternity of love and defining what is by stating what is not are themes that run through both sonnets. ...read more.

Porphyria's lover unties the hair around Porphyrias neck, which releases the pressure of blood to her head and her blood returns to her face and makes her appear to be blushing. He then kisses her and is convinced that she "blushed bright beneath my burning kiss". He says that "all night long we have not stirred" he thinks that it is because they are lying next to each other and have not stirred because they are content, but in fact Porphyria cannot stir as she is dead. He does not think he has done anything wrong and that his action was sanctioned by God as "God has not said a word". The similarities between Browning's Porphyria's lover and Shakespeare's sonnets are the idea of eternity, Shakespeare talks about love or the lover being made immortal through his skill of writing, Browning talks about love being preserved eternally by killing the lover. "All it scorned at once is fled, And I, its love, am gained instead". Both writers use weather imagery, Shakespeare uses strong naturalistic imagery to compare love to a summers day in "sonnet 18" and stars and tempests in sonnet 116, Browning used the weather to set the scene and dark mood for his poem. Both poems are from a male viewpoint, both Porphyria's lover, Browning and Shakespeare being male, there is no female input to any of the poems and all the poems make confident boasts. Shakespeare uses the couplets at the end of his sonnets to say that his ideas are right, Browning at the end of Porpyria's lover, writes that Porphyria's lover is confident that he has done the right thing. ...read more.