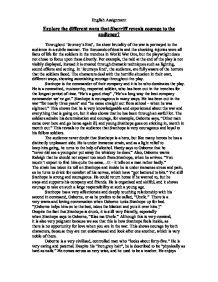 Explore the different ways that Sherriff reveals courage to the audience?

Explore the different ways that Sherriff reveals courage to the audience? Throughout 'Journey's End', the sheer brutality of the war is portrayed to the audience in a subtle manner. The thousands of deaths and the shocking injuries were all facts of life for the soldiers in the trenches in World War One, but the playwright does not chose to focus upon these directly. For example, the raid at the end of the play is not visibly displayed, instead it is created through dramatic techniques such as lighting, sound effects and setting. In 'Journeys End', the audience, are fully aware of the horrors that the soldiers faced. The characters deal with the horrific situation in their own, different ways, showing astonishing courage throughout the play. Stanhope is the commander of their company and it is he who dominates the play. He is a committed, trustworthy, respected soldier, who has been out in the trenches for the longest period of time. "He's a good chap" ,"He's a long way the best company commander we've got." Stanhope is courageous in many ways. He has been out in the war "for nearly three years" and "he came straight out from school - when he was eighteen." ...read more.

He does not worry if people laugh at him because he is reading a child's book, because he is strong-minded and at ease with who he is. This shows a different type of courage that Osborne has. Raleigh on the other hand, is very na�ve about the raid, but this is because he is young and inexperienced, and just thinks it is " frightfully exciting!" This illuminates just how na�ve and innocent he is to the audience, who feel sorry for him in this state. The audience are aware of how serious and dangerous the raid will be, because the other officers had been speaking about it in the previous scene. " I reckon the Boche are all ready waiting for it." This creates sympathy for Raleigh, and shows how courageous he is going off to fight, not knowing what to expect or when to return. Raleigh is young and enthusiastic and will do anything for his fellow soldiers. He looks up to Stanhope because he used to go to school with him. He is courageous in many ways. Firstly, the fact that he had joined a new company must have been really frightening for him. On top of that, he was selected for the raid. ...read more.

Finally Stanhope congratulates Hibbert, "Good man Hibbert. I liked the way that you stuck that." Although Hibbert is made out to be scared and cowardly, he shows great courage in this scene. He is not only brave and courageous in the fact that he stands up to Stanhope, and tells him to shoot him, but also because he admits to Stanhope exactly how he feels. All the other soldiers have to put on a brave face and be fearless and strong, but Hibbert just can't take any more waiting to see if he will die, he would prefer it if he was shot by Stanhope, than be killed by the Germans. This scene really shows us just how courageous the men are, as it helps us to understand the real pressure that the men are under, waiting, not knowing whether they will live or die. Overall, I feel that all the characters in Journey's End show amazing amounts of courage. They were under immense pressure and strain, and the play really makes the audience realise the true courage shown by the men. I'm sure that in achieving these numerous and vivid displays of courage, Sherriff gained immeasurably from his first hand experience in being a soldier himself, and fighting in World War One. They risked their lives for their country, and there are no words to describe just how terrible it was for them. English Assignment ...read more.