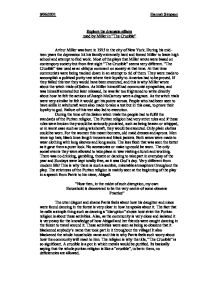 Explore the dramatic effects used by Miller in &amp;#147;The Crucible&amp;#148;

Explore the dramatic effects used by Miller in "The Crucible" Arthur Miller was born in 1915 in the city of New York. During his mid-teen years the depression hit his family extremely hard and forced Miller to leave high school and attempt to find work. Most of the plays that Miller wrote were based on contempory society but from first sight "The Crucible" seems very different. "The Crucible" was used as an oblique comment on society at that time. At that time communists were being tracked down in an attempt to rid of them. They were made to accomplish a political purity test where their loyalty to America had to be proved. If they failed this test they would have been executed, and this is why Miller wrote about the witch trials of Salem. As Miller himself had communist sympathies, and was himself arrested but later released, he was far too frightened to write directly about how he felt the actions of Joseph McCartney were a disgrace. As the witch trials were very similar he felt it would get his points across. People who had been seen to have skills in witchcraft were also made to take a test but in this case, to prove their loyalty to god. Failure of this test also led to execution. During the time of the Salem witch trials the people had to fulfil the standards of the Puritan religion. The Puritan religion had very strict rules and if these rules were broken they would be seriously punished, such as being beaten or whipped, or in worst case such as using witchcraft, they would be executed. Only plain clothes could be worn. For the women this meant bonnets, old maid dresses and aprons. Men wore top hats, black knee length trousers and black jackets. Both sexes were made to wear clothing with long sleeves and long socks. ...read more.

The scene in the woods at the beginning of the film, "The Crucible", gives us the first impression that Abigail is a strong character, which is then proven to be true mainly in the beginning of the play. Her scene where she threatens the girls shows how Abigail over-powers the other girls. The way they don't speak up to her shows they are scared of what she is capable of doing and they don't want to be on the receiving end of it. "Let either of you breathe a word, or the edge of a word, about the other things, and I will come to you in the black of some terrible night and I will bring a pointy reckoning that will shudder you" The power of Abigail's character is definitely shown here by how she blackmails the girls with such a nasty threat. Abigail creates such a high amount of tension in the audience, as she is such a hard character to work out and leaves you questioning what she will do next. She seems very cunning by how she plots revenge on Elizabeth and Proctor and shows no shame of what she is doing. Her strength is not shown just by her threats and how she betrays people but by how strong she is mentally. To be able to threaten friends and ex-lovers etc and still be able to put on an act of such a pleasant, God loving, angel like young girl to others must take an extremely strong, and evil, minded person. The other side we see of Abigail is that of a "whore", in John Proctors words. We are informed of Abigail and John Proctors affair towards the beginning of the play when Abigail tries to seduce Proctor but he turns her down. "I will cut off my hand before I'll ever reach for you again" This shows how Proctor is not scared of Abigail, he seems to think of her as just a little "child" but he underestimates how clever and bitter she really is. ...read more.

This is the type of evil that is less likely to be noticed in the play but it is still there as Miller has tried to create a sense of evil from many different actions of the people to keep the tension high and create many dramatic moments! Miller has created many dramatic moments, not just from obscene events such as the hangings or the hysteria of the girls, but also from simple acts such as Proctor and Abigail's confrontation of how they feel. These are all dramatic and cause a lot of tension for the audience but they're all from many different uses of emotions and actions. The main dramatic events came from moments of wickedness and hysteria because, as I said in the last paragraph, they were seen as being more outrageous due to the way of life in that time and were a lot more surprising for the audience. They also seemed a lot more dramatic as they were seen as outrageous for even our day society as they were so cunning and appalling acts of behaviour. I think Miller has got his message across well of the society he was living in at that time with, the hunt for people with communist sympathies, as being just like the acts of mainly the girls and how they have been tracking down innocent people for reasons that are not always harming our society. The communists have not been harming anybodies lives with their beliefs and not all witchcraft is used for bad! In conclusion I think Miller created his Dramatic effects mainly with the use of the girls and their obscene actions. I think he did this very well and overall the amount of dramatic events in the play was what kept the audience interested. The audience were always awaiting the next act of outrageous behaviour. It was what kept the play going and without such dramatic events I feel the play would not have succeeded in making his point about the political purity test being ridiculous and unnecessary. 9/06/2001 Hannah Simpson ...read more.