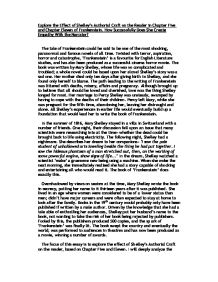 Explore the Effect of Shelley's Authorial Craft on the Reader in Chapter Five and Chapter Eleven of Frankenstein. How Successfully Does She Create Empathy With the Narrator?

Explore the Effect of Shelley's Authorial Craft on the Reader in Chapter Five and Chapter Eleven of Frankenstein. How Successfully Does She Create Empathy With the Narrator? The tale of Frankenstein could be said to be one of the most shocking, paranormal and famous novels of all time. Twisted with terror, aspiration, horror and catastrophe, 'Frankenstein' is a favourite for English Literature studies, and has also been produced as a successful cinema horror movie. The book was written by Mary Shelley, whose life was so complicated and troubled; a whole novel could be based upon her alone! Shelley's story was a sad one. Her mother died only ten days after giving birth to Shelley, and she found only herself to blame. The path leading to the writing of Frankenstein was littered with deaths, misery, affairs and pregnancy. Although brought up to believe that all should be loved and cherished, love was the thing Shelley longed for most. Her marriage to Percy Shelley was unsteady, swamped by having to cope with the deaths of their children. Percy left Mary, while she was pregnant for the fifth time, abandoning her, leaving her distraught and alone. All Shelley's experiences in earlier life would eventually build up a foundation that would lead her to write the book of Frankenstein. In the summer of 1816, Mary Shelley stayed in a villa in Switzerland with a number of friends. One night, their discussion fell upon an issue that many scientists were researching into at the time- whether the dead could be brought back to life using electricity. The following night, Shelley had a nightmare. She describes her dream to her companions- 'I saw the pale student of unhallowed arts kneeling beside the thing he had put together. I saw the hideous phantasm of a man stretched out, then, on the working of some powerful engine, show signs of life...' ...read more.

Short, snappy sentences, with perhaps just one clause, are very effective in creating drama within text. Short sentences can create a rapid, fast pace, and in my view should have been used at this point of the chapter. The whole novel is written in the first person, meaning that it is written from one's point of view. Chapter Five is written from the view point of Victor Frankenstein. Using the first person is a fantastic way of enabling the audience to understand the narrator's feelings and emotions, and can help the audience to put themselves in the narrator's place. It helps the reader to experience themselves Frankenstein's feelings. Text written in the First Person appears more direct, and as though it has been written particularly for the individual reader. Throughout Chapter Five, the first person singular 'I' is used, for example- 'How can I describe my emotions at this catastrophe', and 'I had desired it with an ardour that far exceeded moderation'. Personally, this technique makes me feel empathy and sympathy for Frankenstein. As it enables Frankenstein's feelings to be revealed, I can understand what must be going through his mind as, 'by the glimmer of the half-extinguished light', he watches in horror as the 'dull yellow eye' of his creature opens. 'How can I describe my emotions at this catastrophe, or how delineate the wretch whom with such infinite pains and care I had endeavored to form? His limbs were in proportion, and I had selected his features beautiful. Beautiful!-Great God!' The moment Frankenstein lays eyes on this new, ugly being, he regrets immediately what he had done, and the 'beauty of the dream vanished'. After spending two years locked away, devoting himself to crafting this new creature to life, Frankenstein had become blind to the reality of infusing life into such a being. When he finally realizes, it is too late, and is overcome with shock, disappointment, regret, and horror. ...read more.

There are also numerous noun phrases, for example- 'the warmth of the sun...shone brightly on the white ground'. These also aid to the image the reader will have of this place in the forest. Shelley also uses the 'appeal to the senses' technique in her writing. In this technique, rather than just explaining what the characters sees, the author describes what the character feels, touches, tastes, and hears also. This is clearly seen in the text- 'the light became more and more oppressive...the heart wearying me...felt tormented by hunger and thirst'. This writing strategy enables the writing to explain in depth about the characters feelings and emotions, therefore enabling the audience to have a profound understanding of the creature. The whole chapter is detailed, and successfully creates empathy with the creature, as on Chapter Five where empathy is created with Victor Frankenstein. The chapter causes the reader to rethink about their views on Frankenstein, and shows that there is more than one point of view to the story. The creation of empathy is especially successful in Chapter Eleven, as the creature's thoughts are written about deeply, and Shelley as thought about all the new things that the creature would come across when exploring the new world around it. Mary Shelley varies her style throughout the chapters and keeps the audience interested. While adopting a tense, frantic tone in Chapter Five, she uses an explorative and fresh tone in Chapter Eleven. She uses many skills and techniques throughout in order to create empathy with the narrator, and this is done successfully. This is a sign of a skilled writer. While my personal opinion is that some areas of the text could be slightly altered to increase the effect on the reader, the talent of one of English Literature's most esteemed writer's is obvious. After writing a number of other books, Mary Shelley, at the age of 53, sadly passed away- though the spark of Frankenstein remains alive to this day. ...read more.