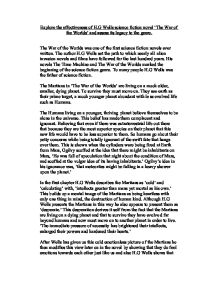 Explore the effectiveness of H.G Wells science fiction novel 'The War of the Worlds' and assess its legacy to the genre.

Explore the effectiveness of H.G Wells science fiction novel 'The War of the Worlds' and assess its legacy to the genre. The War of the Worlds was one of the first science fiction novels ever written. The author H.G Wells set the path to which nearly all alien invasion novels and films have followed for the last hundred years. His novels The Time Machine and The War of the Worlds marked the beginning of the science fiction genre. To many people H.G Wells was the father of science fiction. The Martians in 'The War of the Worlds' are living on a much older, smaller, dying planet. To survive they must move on. They see earth as their prime target, a much younger planet abundant with less evolved life such as Humans. The Humans living on a younger, thriving planet believe themselves to be alone in the universe. This belief has made them complacent and ignorant. Believing that even if there was extraterrestrial life out there that because they are the most superior species on their planet that this new life would have to be less superior to them. So humans go about their petty concerns while being totally ignorant of the swift fate that hangs over them. This is shown when the cylinders were being fired at Earth from Mars, Ogilvy scoffed at the idea that there might be inhabitants on Mars, 'He was full of speculation that night about the condition of Mars, and scoffed at the vulgar idea of its having inhabitants.' ...read more.

The Thunder Child puts up a valiant fight, destroying one Martian; through luck more than anything. Then as it turns to face the next Martian a heat ray is brought to bear and destroys The Thunder Child, 'Then with a violent thud, a blinding flash, her decks, her funnels, leaped upwards.' This suggests that not even our best fighting machine can begin to compare to the Martians fighting machines. The destruction of The Thunder Child shows that we rely on our technology, thinking that we are superior and that no one else could possibly have anything better, but this shows that our technology will not always win as did the battle of Jutland in the Second World war when both Britain's and Germanys Ironclads were all wiped out in one battle. H.G Wells also criticises the government. He suggests that the Governing classes are inefficient and ineffectual by making the resistance to the Martians in his novel weak and scattered. Also he implies in his novel that the government don't care very much for the people and take too long over important decisions and when they do make decisions they are often disastrous, 'The whole of the second volley flew wide of the Martian on the ground, and, simultaneously, both his companions brought their heat rays to bear on the battery. The ammunition blew up, the pine trees all about the guns flashed into fire, and only one or two of the men who were already running over the crest of the hill escaped.' ...read more.

This shows his understanding of what is going on around him is only skin deep, suggesting that he cannot see the corruption around him. When the main character and the Curate are trapped in the house the greed of the Curate shows its true colours, when there are only limited rations left the Curate sneaks off to the scullery to drink and eat, ' In the darkness I heard the Curate drinking, I snatched in the darkness and caught a bottle of burgundy.' This greed and selfishness eventually means that the Curate is killed. He is killed by the main character who has no choice as insanity had gripped the curate who was shouting to the Martians because the main character was stopping him from eating all the food and rationing it sensibly this was risking both of there lives so there was no other choice but to kill him. H.G wells, war of The World is not only effective in that it was the first science fiction novel, the effectiveness was brought through the daring way in which it was written, criticising major constitutions such as the church and the government. He brought his writing to life drawing people into the story using his scientific knowledge, making people believe that this could possibly happen. For this the War of the Worlds will live on as a legacy of his genre, and will almost definitely influence many great writers of the future, in more ways than one this book will live with us forever. ...read more.