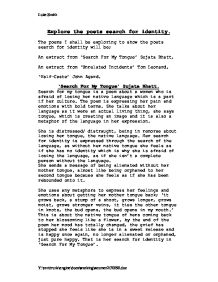 Explore the poets search for identity in 'Search For My Tongue', 'Unrelated Incidents', and 'Half-Caste'.

Explore the poets search for identity. The poems I shall be exploring to show the poets search for identity will be; An extract from 'Search For My Tongue' Sujata Bhatt, An extract from 'Unrelated Incidents' Tom Leonard, 'Half-Caste' John Agard. 'Search For My Tongue' Sujata Bhatt. Search for my tongue is a poem about a women who is afraid of losing her native language which is a part if her culture. The poem is expressing her pain and emotions with bold terms. She talks about her language as it were an actual living thing, she says tongue, which is creating an image and it is also a metaphor of the language in her expression. She is distressed/ distraught, being in remorse about losing her tongue, the native language. Her search for identity is expressed through the search of the language, as without her native tongue she feels as if she has no identity which is why she is afraid of losing the language, as if she isn't a complete person without the language. ...read more.

His emotions are very fierce and angry towards the language. He doesn't use the language correctly and he hates it with a deep passion that is very strong, it is a rebellion against the queens English which he is very contempt towards, he wants to prove that the English language is breaking down the Scottish conventions and traditions; he is very keen and fond of the Scottish traditions. He is fed up of seeing British people with British accents on the Scottish news, even though they are broadcasted by the BBC, which is where the man contradicts himself as BBC stands fir British Broad Casting so if he doesn't want to watch the British on his TV then he shouldn't watch the BBC news channels. This man hates the English language and its literature, to get back at the language he uses no technical terms what so ever through out the entire poem; 'this is ma trooth' this expresses that he wants to speak and hear his local accent etc. ...read more.

This poets search for identity is shown through his anger and at the end of the poem how he empathises with the reader, basically saying I understand why you call me half-cast and if you come back tomorrow I will teach/ educate you, as long as you look at me as a whole person and not a half-cast; 'but yu must come back tomorrow wid de whole of yu eye an e whole of yu ear an de whole of yu mind an I will tell yu de other half of my story' this is the quote which I have analysed above and decided that this is the poets search for identity. 'unrelated incidents' and 'half-caste' are the two poems that relate to each other as the poets are very similar in the way they think and the way they write (in phonetic) this is to show their anger and emotion towards the English attitude towards them as people and their culture etc. the other poem just sympathises the loss of the language and needs to get it back, it's a similar emotion to the other two but not the same. Luke Smith \Explore the poets search for identity.doc ...read more.