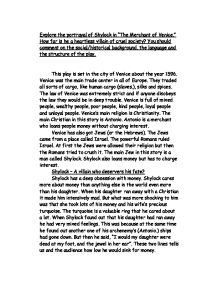 Explore the portrayal of Shylock in &amp;#147;The Merchant of Venice.&amp;#148; How far is he a heartless villain of cruel society? You should comment on the social/historical background, the language and the structure of the play.

Explore the portrayal of Shylock in "The Merchant of Venice." How far is he a heartless villain of cruel society? You should comment on the social/historical background, the language and the structure of the play. This play is set in the city of Venice about the year 1596. Venice was the main trade center in all of Europe. They traded all sorts of cargo, like human cargo (slaves.), silks and spices. The law of Venice was extremely strict and if anyone disobeys the law they would be in deep trouble. Venice is full of mixed people, wealthy people, poor people, kind people, loyal people and unloyal people. Venice's main religion is Christianity. The main Christian in this story is Antonio. Antonio is a merchant who loans people money without charging interest. Venice has also got Jews (or the Hebrews). The Jews came from a place called Israel. The powerful Romans ruled Israel. At first the Jews were allowed their religion but then the Romans tried to crush it. The main Jew in this story is a man called Shylock. Shylock also loans money but has to charge interest. Shylock - A villain who deservers his fate? Shylock has a deep obsession with money. Shylock cares more about money than anything else in the world even more than his daughter. When his daughter ran away with a Christian it made him intensively mad. ...read more.

Like when he hears the awful news that all of Antonio's ships have gone down and that he would be able to have his 1lb of flesh, he was delighted. But then at the same time he had got some bad news. He found out that his daughter had ran away with a Christian and she had taken most of his money. But as soon as he heard the bad news he forgot about and started talking about how his bond came true. But soon it all got to his head and he became obsessive with how he is going to kill the Christian he hates most Antonio. When he gets to the court he comes prepared for everything. And he amazed the whole courtroom by bringing his own pair on scales and his own knife. This proved to everyone in the audience what a disgusting and evil man he really was. And to top of his evil ways, while the court case was in action Shylock was sitting on the floor sharpening his knife on his leather shoe. All pleads of mercy towards Shylock were turned down. Even after Portia's humungous speech about mercy he still said no. In the speech she basically said that mercy is a blessing form god and if you show mercy you will receive mercy. " It is an attribute to god himself ". ...read more.

I think that this speech is excellent I love the way that he put he words, which makes it down to the point while being sarcastic. What he says is, you called me dog, spat on me and for this I shall lend you money. Antonio had also called him " misbeliever, cut-throat dog ". When I first heard this speech I felt like killing Antonio, from all the info we had so far I got the impression that Shylock is capable of every day life until the evil Antonio suddenly pops up and ruins everything. I think that the punishment that was given to Shylock is way to harsh. The punishment is that half is wealth shall go to the city of Venice and the other half shall be his until he dies when it shall go to Jessica. But even worse is that Shylock has to become a Christian. I think that turning Shylock into a Christian is the most horrific thing you can do. Shylock will have to go Church, eat with Christian people and change his whole way of Jewish life. In the early scenes he told us how much he hated Christians and that he would never dine with Christians as long as he lived. So turning him into a Christian is making him turn against everything and everyone he ever loved and believed in. ...read more.