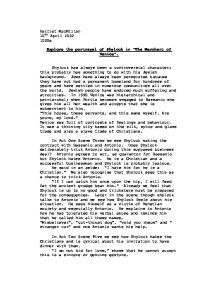 Harriet MacMillan 10th April 2002 10SEa Explore the portrayal of Shylock in "The Merchant of Venice". Shylock has always been a controversial character; this probably has something to do with his Jewish background. Jews have always been persecuted because they have not had a permanent homeland for hundreds of years and have settled in numerous communities all over the world. Jewish people have endured much suffering and atrocities. In 1595 Venice was hierarchical and patriarchal; when Portia becomes engaged to Bassanio she gives him all her wealth and accepts that she is subservient to him. "This house, these servants, and this same myself. Are yours, my lord." Venice was full of contrasts of feelings and behaviour. It was a thriving city based on the silk, spice and glass trade and also a slave trade of Christians. In Act One Scene Three we see Shylock making the contract with Bassanio and Antonio. Does Shylock deliberately trick Antonio during this supposed business deal? Antonio agrees to act, as guarantor for Bassanio but Shylock hates Antonio. He is a Christian and a successful businessman and Shylock is probably jealous. He said in an aside: "I hate his for he is a Christian." We also recognise that Shylock sees this as a chance to trick Antonio. "If I can catch him once upon the hip, I will feed fat the ancient grudge bear him." ...read more.

We start to feel sorry for Shylock here because he gives logical reasons for not hating Jews. He uses rhetoric to make his point. He also feels very persecuted, he says that Christians do everything Christians do but do not get punished for it. "If a Christian wrongs a Jew what should his sufferance be by Christian example? Why revenge." This is one of the more powerful speeches in the play making us question whether Shylock really is a victim or villain? However we quickly lose sympathy when he wishes his daughter dead so as to retrieve his wealth. "I would my daughter were dead at my foot and the jewels in her ear!" We also see how brutal Shylock can be when he is determined to get his revenge of Antonio. "I'm very glad of it, I'll plague him, I'll torture him", and finally "I will have the heart of him if he forfeit." Shylock is determined to get his pound of flesh, however distasteful. In Act Three Scene Three Shylock continues to show his obsession with money. He is abusive towards Antonio, "This is the fool that lent out money gratis." In his next speech we see his determination to get revenge on Antonio, this is probably because he feels as though Antonio was rude to him. ...read more.

He was even prepared to discard his own flesh and blood, his daughter, for eloping with a Christian. Half way through the play Shylock comes across as though he is the victor, because there does not seem as though there is a way of preventing Shylock of taking Antonio's life. The courtroom scene changed everything. We see Portia's quick thinking, she miraculously turns the whole story around so that Shylock ends up a broken man losing his religion, fortune and dignity. In my conclusion on whether Shylock is a victim or villain in this play you could argue either way. It is obvious to us throughout the play that he is a victim of racial abuse; because of this abuse he feels justified in exploiting the Christians. He does this by setting up a bond with Antonio to extract money then he is prepared to kill Antonio and shows his no mercy. You could argue that if Shylock was treated less harshly by the Christians in the first place he would not have retaliated and been so obsessed with revenge. Can you excuse anyone who wanted someone just because they had a few insults thrown at them? Can you really justify Shylock wanting to kill? To me you cannot justify this; and because of this I think that Shylock is the villain of this play. ...read more.