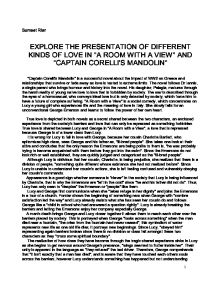 Sumeet Riar EXPLORE THE PRESENTATION OF DIFFERENT KINDS OF LOVE IN "A ROOM WITH A VIEW" AND "CAPTAIN CORELLI'S MANDOLIN" "Captain Corelli's Mandolin" is a successful novel about the impact of WW2 on Greece and relationships that survive or fade away as love is tested to extreme limits. The novel follows Dr Iannis, a single parent who brings humour and history into the novel. His daughter, Pelagia, matures through the harsh reality of young na�ve love to love that is forbidden by society. The war is described through the eyes of a homosexual, who conveys ideal love but is only detested by society, which force him to have a future of complete suffering. "A Room with a View" is a social comedy, which concentrates on Lucy a young girl who experiences life and the meaning of love in Italy. She slowly falls for an unconventional George Emerson and learns to follow the power of her own heart. True love is depicted in both novels as a secret shared between the two characters, an enclosed experience from the society's barriers and love that can only be repressed as something forbidden. True love is shared between Lucy and George in "A Room with a View", a love that is repressed because George is of a lower class than Lucy. It is wrong for Lucy to fall in love with George, because her cousin Charlotte Bartlett, who epitomizes high class, sees George and his father as, "ill-bred people". She takes one look at their attire and concludes that the only reason the Emersons are being polite to them is, "he was probably trying to become acquainted with them before they got into the swim". Since the Emersons do not look rich or well established, they are quickly judged and categorized as the "ill-bred people". Although Lucy is oblivious that her cousin, Charlotte, is being prejudice, she realizes that there is a division of people, "something quite different whose existence she had not realized before". ...read more.

His effortless yet significant way of thinking is portrayed in George who believes to be kind to everyone, "improves our characters". The influence Mr Emerson has on George is encouraging because it makes George show love towards his father out of respect, "but he is kind to people because he loves them". Like Dr Iannis, Mr Emerson instinctively knows that his child is "unhappy" since his love for children is apparent, "a baby is worth a dozen saints. And my baby's worth the whole of Paradise, and as far as I can see he lives in Hell". As a concerned father, he asks the help of Lucy, "I don't require you to fall in love with my boy, but I do think you might try and understand him". Mr Emerson repeatedly tells Lucy to "let yourself go" and "by understanding George you may learn to understand yourself. It will be good for both of you", his unconventional way of thinking portrays his love and understanding through experience and instead of telling his son off and forcing him, Mr Emerson lets nature take it's course, "let us love one another and work and rejoice". Mr Emerson wants Lucy to make George "think like us" because they both know the value of life, since Mr Emerson has loved his wife and Lucy has experience through her music however; George has nothing to portray his feelings through. The love is presented as Mr Emerson tries to explain, "that by the side of the everlasting Why there is a Yes- a transitory Yes if you like, but a Yes". He appears as a father figure also, "he touched her hand gently with his hand...she regarded him as a kind thing, but quite silly". Mr Emerson is an amiable and remarkable father given that he lets his son be an individual by letting him explore love for himself without placing any barriers, "I taught him to trust in love...when love comes, that is the reality". ...read more.

Carlo's love is represented as ideal because he "only wanted to be in love with Francesco" by protecting him at war and this love increased "by the thought that soon we might lose each other to a bullet". Although at the beginning Carlo admits that he "was attracted most of all to his face" this physical love slowly turns compassionate love, "I thanked God that I had been wounded and not Francesco". As the harsh reality or war takes it's toll on Francesco he unfortunately dies and Carlo "vowed that I would live for both of us". This passion can only be seen as true love that in the words of Mr Emerson that "love is eternal". This love "inspires" Carlo to carry on with life only soon to lose it to protect a man, Captain Corelli, who became a "source of optimism" for him. But for Carlo this love is only felt as "shameful" as when the time came for the death of Corelli, Carlo stepped in front of him in the line of fire by the Germans and, "stood unbroken as one bullet after another burrowed like white-hot parasitic knives into the muscle of his chest". Carlo sacrifices his life for someone he loved, he is portrayed as a sacrifilage figure like Jesus but the love is ironic because Carlo is gay. Overall, love is presented as ideal and natural but it is the society that the characters are influenced by that makes their love seem different. The parental love is portrayed through humour in both novels as the single parent uses their own experience of life to teach the importance and value of love. The false love is the result of society's barriers since Cecil and Lucy seemed conventional but it only lead to an artificial love. The ideal love is seen through sympathy because it is something that is rare in both novels since people who "shut" their eyes to the reality and learn to alienate people because they do not understand them despise it. 1 ...read more.