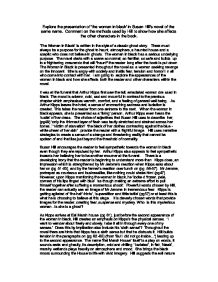 Explore the presentation of 'the woman in black

Explore the presentation of 'the woman in black' in Susan Hill's novel of the same name. Comment on the methods used by Hill to show how she affects the other characters in the book. 'The Woman in Black' is written in the style of a classic ghost story. There must always be a purpose for the ghost to haunt, atmosphere, a haunted house and a sceptic who does not believe in ghosts. The woman in black has a serious underlying purpose. The novel starts with a scene so normal, so familiar, so safe and builds up to a frightening crescendo that will "haunt" the reader long after the book is put down. The Woman in Black is presented throughout the novel as a woman seeking revenge on the innocent. She is angry with society and instils fear, tension and horror in all who come into contact with her. I am going to explore the appearances of the woman in black and how she affects both the reader and other characters within the novel. It was at the funeral that Arthur Kipps first saw the tall, emaciated woman dressed in black. The mood is solemn, cold, sad and mournful in contrast to the previous chapter which emphasises warmth, comfort, and a feeling of general well being. As Arthur Kipps leaves the hotel, a sense of encroaching sadness and isolation is created. This takes the reader from one extreme to the next. ...read more.

This second appearance of the woman in black has a completely different effect on Arthus Kipps and us, the readers. Whilst we felt sympathetic towards her before, now she conjures up a vision of pure terror and evil. Kipps actually begins to question whether or not she is in fact a ghost. The narrative appears to play on our ironic sense that Kipps is an innocent who is in more danger than he realises. The experience of evil is by its nature mysterious. Kipps comment that 'the words seem hopelessly inadequate to express what I saw' (pg65) acknowledges the problem of expressing a sensation that seems to lie beyond words. Evil is suggested by Hill using a combination of images, symbols, situation, atmosphere and principally a focus on the effects on a character who experiences it. The third time we are aware of the woman in black is when Arthur Kipps hears the accident with the pony and trap, (pg 74-75) 'the shrill neighing and whinnying of a horse in panic' and 'a cry, shout, a terrified sobbing' believed to come from a child. The narrative creates a sense of distorted perceptions on (pg 73-75). Initially, Kipps thinks it is a real accident and is horrified that he was unable to help. Shaken by his experiences, Kipps becomes angry at his foolishness in ignoring 'all the hints and veiled warnings' he had received about Eel Marsh House 'and to long - no, to pray - for some kind of speedy deliverance and ...read more.

The name 'Monk's Piece' is a play on words. He is content, happy and peaceful, perhaps this is an attempt to give the reader hope that whatever happens throughout the novel, in the end he does find peace. The book's strength is in the character of Arthur Kipps. He is immensely likable and level-headed. It is easy to relate to him. He's naturally sceptical when first presented with the possibility of a haunting but eventually he accepts the evidence. When he sets off to spend a few days in the isolated mansion, you feel like shouting, "Are you crazy? Don't stay there overnight," You feel for Arthur Kipps in his trials and tribulations dealing with the Woman in Black. I particularly liked the way the spectral happenings were presented. There was no blood, no gore, just a brooding sense of evil and mystery. I also enjoyed the relationships Arthur establishes with the kindly Samuel Daily and the little dog Spider that Samuel lends to him to keep him company in his ill-advised sojourn to the haunted house. Stella always remains on the edge of the story, a part of the normal world that Kipps has temporarily left behind. Susan Hill packs this novel with twists, turns and the unexpected at almost every turn of the page. The description of the brooding countryside, the house and surrounding marshes is at times beautiful, but always spooky, chilling in a manner far more piercing than the cold marsh mists integral to the plot. That unexpected final twist will keep this story in your subconscious for a long time. ?? ?? ?? ?? ...read more.